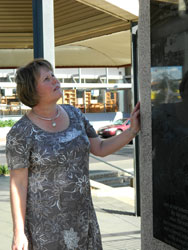 ONE year on and the physical and emotional scars of the January 2011 floods and cyclone are still evident throughout Queensland.

In an area which bore the brunt of the flood’s casualties, The Downs Presbytery Minister

Sharon Kirk said she deliberately did not watch any news replays of the footage from the devastating events.

“I just can’t bring myself to relive it or watch people’s tragedies replayed.

“To me it seems wrong to sensationalise the event again, although the anniversary does need to be marked in a respectful
way – it’s a fine balance and a challenge for the media,” she said.

Ms Kirk went on to say that in the past year trauma from the floods has changed her life significantly.

“This year I decided not to go away due in part to anxiety about getting stranded.

“I listen to weather and road reports very carefully these days.

“There is a sense that somehow we missed a chunk of 2011 that people usually rely on for rest and recreation, emotionally and psychologically.

“We can’t get that time back so we have been running on low reserves for all of 2011,” she said.

“One year on I could well imagine that many are still processing what happened and constantly fearing whether it will happen again and how can they prepare for such an event of this magnitude,” he said.

As Disaster Recovery Chaplain, Mr Rutherford hopes to encourage communities to develop their own program of recovery that hopefully will include memory, and the “telling of the story”.

Old soldiers do not gather to glorify war but in order to tell their stories.

It is in telling their stories each year they process and deal with the horrors they all went through.

“Our role now is not to help people to forget but to remember and to assist them build back better in their own way,” he said.

Mr Rutherford emphasised the need to remember last year’s events and the value of ritual in assisting with the recovery
process.

“I am now able to make a response some 12 months down the track.

I do believe this is the best time, as it will have taken this long to just begin to process what has happened and, for many, the next step will need much care and consultation.

“I see my upcoming role as communicating and consulting with the communities and assisting them to develop a degree of emotional resilience as they put in place what I believe must be a community-led recovery process”.

Crows Nest Uniting Church minister Rev David Graham said that making sense of the lives lost during the floods may take a lifetime.

“The lives that have been lost can never be replaced.

But we believe that they are in God’s care now.”

To prevent a similar disaster from happening again, Mr Graham would like to see legislation enacted which would prevent people from living in low-lying areas beside waterways.

“It would be seriously remiss for future generations not to learn the lessons from this disaster,” he said.

One of the only positives that may have come out of the floods is a course in Psychological First Aid which has been mandated to all ministers in The Downs Presbytery to help people trying to cope with psychological trauma.

“We also saw the very best of human nature in action after the floods as the community pulled together to help the survivors.

Another minor blessing was the sense of community that saw neighbours who had never spoken helping each other in a time of disaster.

Photo : The Downs Presbytery Minister, Sharon Kirk, inspects the plaque erected in Toowoomba to commemorate the events of January 2011. Photo by David Kirk