Home > Features > How are we different?

How are we different? 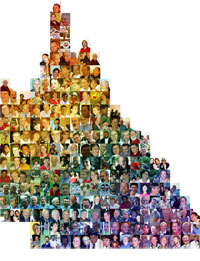 Caught with a bad case of the jitters after the July 7th bomb blasts in London and the not forgotten September 11th, Australian authorities are contemplating the use of racial profiling as a strategy to deal with terrorism.

Racism has its foundations in the belief  human beings belong to different races which can be differentiated by culture, ethnicity, skin-colour, national boundaries, regions, and religion.

This is in direct opposition to the Christian belief that while diversity is a gift from God there is only one human race, and all human beings are created by God in the image and likeness of God.

The Uniting Church in Australia has a long tradition of confronting racism.  At the inaugural Assembly in 1977 in a statement to the nation, the church pledged to seek to correct injustices wherever they occur and work for the eradication of racism within our society.

The 10th Assembly, meeting in Melbourne in 2003, again firmly condemned racism by recognising that racism is a sin that reflects alienation from God and one another and is incompatible with the Gospel.

The Assembly reaffirmed its commitment to work to overcome racism in Australia and beyond, and called on the church to model the inclusive love of Christ by building communities of justice and love, and practising respect and equality in all relationships.

Racism is still active in Queensland. The Australian reported on 26 July 2005 that a neo-Nazi group on the Darling Downs had admitted waging a race-hate campaign against African refugees and warned that this will be intensified in Toowoomba and elsewhere in Australia.

“Our Queensland branch has been rather active, I’m pleased to say,” Mr Davis said. “When you get crime in these areas, you know it’s going to be the blacks.”

Offering tactical advice for young white racists the Coalition’s website warns against direct physical or verbal confrontation with non-whites, “at least at this point in time”, but suggests that, “The day will arrive when it will be safe to do this”.

The advice goes on to suggest young racists should “not mix and procreate with these lesser beings”.

Social Responsibility Advocate for the Queensland Synod Ms Heather den Houting said, “Racism is not just about extremist groups like White Pride, it is about the way we respond personally and structurally to people from other cultural groups.”

In the words of the last Assembly, “We seek an alternative community in which strangers are welcomed and differences are celebrated; we seek a society where the systems, structures and policies of governments and institutions are racially inclusive; and we seek a country in which all people are valued.”

Racism, racial discrimination, xenophobia and related intolerance have not gone away; it may be up to the church to speak and act out of its commitment to the ideals of equality of opportunity, tolerance, justice and compassion.

“Living in the abundant generosity of God’s love is a way of breaking through our fear and prejudices,” said Ms den Houting.

“Subverting racism is a prophetic act.”