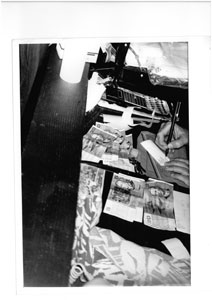 17-YEAR-OLDS have no place in adult prisons, the Queensland Synod reminded the Queensland Government in May 2007, but still no action has been taken to implement a policy recommended in the landmark Fitzgerald Report twenty years ago this month.

UnitingCare Queensland Director Anne Cross, and former Synod Social Justice Advocate Andrew Johnson, told the 2007 Synod that keeping 17-year-olds in adult prisons defied international obligations under the United Nations Con-vention on the Rights of the Child and that State legislation to stop the act was passed in 1992.

In 1987 Siyavash Doostkhah had arrived in Queensland from Iran to a state abuzz with reform and a desire for openness and accountability.

Now, as the Director of the Youth Affairs Network Queensland, he is frustrated with the lack of response to the Fitzgerald Report.

“For 23 years I have been dumbfounded by the lack of adherence to Fitzgerald’s recommendations,” he said.

“They didn’t invest for the magnitude of change required. There is no safety for people to be whistleblowers. They scapegoated a few top cops then left it at that. “The culture remained the same; we need to target the culture.
“The issue of 17-year-olds in adult prison is one example of the things neglected.

“It demonstrates the ethical bankruptcy of the system.”

But the Inquiry did lead to many positive reforms including Freedom of Information legislation, Judicial Review, the creation of the Criminal Justice Commission (later the Crime and Misconduct Commission or CMC) and the Electoral and Administrative Review Commission (EARC).

As a former Director-General of three Queensland Government departments Ms O’Donnell saw the benefits of the post-Fitzgerald changes but has been disap-pointed by the lack of adherence to such changes.
“The EARC was very open. Every submission sent to EARC was published,” she said.

“This made dialogue possible. Yet this level of positive process has never been fully repeated.

“Under subsequent governments the powers of the CMC have been diminished; Freedom of Information watered down to the point that the whole system needed revamping; and some parts of government, such as government owned corporations are even less accountable.”

Ms O’Donnell has other fears too. “I’m quite concerned about aggressive police powers.”

“We’ve seen an increasing number and range of offences.

“Fitzgerald wanted increased checks and balances to ensure police good behaviour and this is no longer the case.”

She also said that government decision-making was no longer open and accountable.

“Decisions are now largely made prior to going to the stakeholders. We need public policy dialogues.”

Director of the UnitingCare Centre for Social Justice Greg Mackay said the State may be ready for another inquiry.

“I believe our institutions are once again so compromised that it is time for another Fitzgerald-style shake up,” he said.

“As well as constant vigil we need to make our voices heard.

“We must not blindly believe all is well as if it is an article of faith; we need to know and be confident.

“Our democratic institutions were still highly vulnerable post-Fitzgerald having emerged from decades of political misuse and even attack; and they are weakening again.”

QUT School of Justice lecturer Dr Mark Lauchs said the key legislative points that came out of Fitzgerald’s report have had little effect because they have been watered down over time.

“Take Freedom of Information, effectively the government has the ability to ensure that if it has something it doesn’t want to release, it doesn’t have to.

“There is no safety valve on that for the public because it is an absolute exemption.

“The Fitzgerald Inquiry took away the idea that everything was right with the world. It made everybody suspicious.”

However Dr Lauchs said the Inquiry was not an indicator of a significant undercurrent of corruption because if that was the case, everything would have been covered up.

“That is not what it found and not what it was. If that was true then the Inquiry wouldn’t have happened.

“The best initiative in Queensland as far as corruption prevention goes came from the Uniting Church, because it came from Noel Preston who argued for an Integrity Commissioner.”

“I think they were a little afraid that Noel would take the job seriously and rock the boat.

“Premiers, archbishops and senior bureaucrats all have an aversion to meddlesome priests,” said Dr Harrison.

“Regardless of the parties, we are heading back towards more of that ‘trust me’ style of governing”, said Dr Lauchs.

“The churches’ role as moral arbiters in society is to maintain the rage and be willing to have a say.”