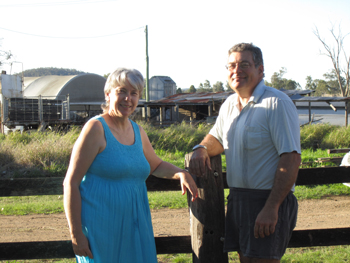 Land is a valuable thing, especially if you make your livelihood from it.

Be it farming stock, crops or mining, land is often the most valuable asset. And living on the land requires a large amount of resilience and faith. Through drought, flood and community upheaval, rural communities battle on to provide the rest of the country with food, energy and even water.

Rev Iain Watt, minister in the Mary Valley, had first hand experience of a community standing together and winning the fight against the proposed Traveston Crossing Dam in the Sunshine Coast hinterland late last year.

Water – the lifeblood of community

While people need water Mr Watt, and Environment Minister Peter Garrett MP, said a dam at Traveston Crossing was not the answer. Mr Watt said the effect on the community was what he struggled with.

“It alienated the Mary Valley community from the wider community who saw the potential for jobs and more water supplies,” he said. “The aggressive, politically motivated project poured money into wasted land purchasing.

“Inevitably, hope of stopping the dam evaporated as over eighty per cent of people signed some form of agreement.”

After the three-and-a-half year battle Mr Watt said the community is quite different now.

“It is war weary, wiser and adapting to the new reality.”

“Many families and businesses have left … At Kandanga school only five of around 50 children are from original families.

“The church has a lead role in encouraging community ‘social capital’ and just leadership at all levels.”

“Fifty years of copper and gold mining have turned the living waterway into a waste drain for deadly water,” said Ms Hobson.

Ms Hobson said politicians needed to be more aware of the effect of mining on waterways.

“In air-conditioned offices in Brisbane and Canberra politicians and public servants will decide if it’s OK for Coal Seam Gas extraction to release more than 85 megalitres of salt laden water per day for 25 years into the quiet grazing land in the catchments of the Dawson and Condamine Rivers.

“The people of Brisbane have learned how to eke out this precious resource, and to realise that if it doesn’t fall out of the sky for ten years, no amount of damming rivers will cause it to materialise.”

Ms Hobson said it was large corporations, like mines, that need to reduce water usage.

But those mines can also provide a town with jobs, money for community services and even a sense of community itself.

He is now on the Central Queensland Presbytery Mining Impact Task group, formed to articulate the community costs and benefits associated with mining.

He said these complex issues were different in each situation and it was necessary to balance the negative community impacts of mining with the positives.

“Mining is a reality and a necessity,” he said. “How can we as a church promote that this is done justly and with minimal impact to communities and individuals?” he asked.

Dr Ferguson said in Clermont, which has almost 150 years of shared mining and agricultural industry, the expansion of the Blair Athol mine was a key moment in the town’s history.

“A town that was in decline went into expansion and built a whole new area, including a new school. Services in the town increased and property values rose.

“Unlike many regional cities 80 per cent of students who complete their education in Clermont stay on and work locally,” he said.

But the opening of the mine was not such good news for Blair Athol township which was part of the mining lease and now no longer exists.

Changing the face of community

Dr Ferguson said in some towns, such as Moranbah (which was created to open the area for mining), the increased population due to mining work has forced the rental market to skyrocket, highlighting what he calls a “two speed” economy.

“There will be miners on six figure incomes and those in service industries on the minimum wage.

“Those on minimum wages cannot afford to live in town.”

For Dr Ferguson the challenge of the rural church is to spread the gospel in their local community despite shift work, loss of young people, drought or flood.

“How do we proclaim that all people are important while they watch their community supports diminish as they are not considered economically viable?

“How do we stand with those who feel powerless in the face of a system that places mining at such a priority over other land users?”
And when a mine closes there are different challenges.

So what will happen when the Blair Athol Coal (BAC) mine in Clermont closes in 2016?

“The mine has no intent to leave the community with a bad taste in its mouth, and they have been actively funding projects that assist the community in thinking of what they can do after the mine closes.”

Jenny and Peter Coombes “contract grow” pigs from around the age of eight weeks to market specifications.

While Mr Coombes focuses on running the piggery, Ms Coombes is lay pastor at Murgon-Goomeri Uniting Church and is doing a Bachelor of Ministry, externally, through the Adelaide College of Divinity.

She said their faith played a large part in their decision to leave city life and move to the country.

“It’s what keeps you going through all the tough times,” said Ms Coombes.

Those times include watching animals die due to drought, experiencing the downturn in the pork industry, poor internet coverage and just life on a farm.

“And the smell!” said Ms Coombes. “It gets in your hair and on your hands.”

Then there are issues fought out in the media by animal welfare groups and major supermarket chains.

“Coles has declared that it will not take Australian pigs from facilities that use sow stalls from about 2013, but they do not apply this criteria to their imported products,” she said.

But for the Coombes family the positives outweigh the difficulties.