Home > Features > Living on the land

Living on the land 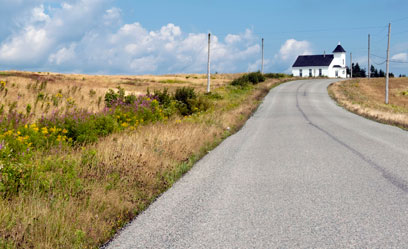 You don’t have to analyse National Church Life Survey (NCLS) data to realise that life in rural communities has different challenges from those of urban centres.

In fact, the best way to understand what life is like further than 100km west of the coast is to talk to the members of our churches and agencies.

In communities all over the country churches and church agencies support the spiritual, emotional and social wellbeing of people in their communities.

“It’s hard to get ministers or lay ministry agents to go out bush,” he said. “Many get themselves so entrenched in the city lifestyle and family obligations that getting them to leave is, as a rural bloke once said, ‘as hard as getting a camel to pass through the eye of a needle’.

“And when they do get out in the bush they face an array of issues like ‘fish bowl’ living, lack of work and educational opportunities, dirt roads and some quaint bush ways like people actually wanting to care for you.

“There may be no musician in your 10 strong congregation meeting at the local disused Anglican Church or CWA hall.

“But, then there will be the joys of clear starry nights, ripper sunsets, bonza waterholes and fantastic tucker.

“Rural ministry doesn’t suit everyone, but the rewards can’t be measured in a simple pros and cons list.”

Mr Hardingham, who is also the secretary of the International Rural Churches Association, said the lack of ministry agents in rural areas may be because we call it ‘rural ministry’.

“We label it and by doing this we automatically make it appear outside what is often seen as ‘normal’ ministry.

“Rural ministry needs to be seen in the context of all ministry … a fair dinkum expression of who Christ is in and through the work of the church.”

“Very few rural congregations can afford to pay for full-time or even part-time ministry let alone financially support missional ventures in their communities,” she said.

“In most cases the congregation’s energy goes into keeping the doors open for Sunday worship, as if the most important thing the church does is offer a service of worship.”

Ms Davison said lay leaders were critical to the future of the rural church. Many lay people have been approved to conduct Communion and Baptisms however the guidelines for lay presiders assume a situation of vacancy between ‘ministers’ requiring them to be regularly re-approved.

“We expect a great deal of them and in many cases give them very little support or encouragement.”

She said working ecumenically also has its own issues.

“Working ecumenically often means a reversion regarding women in ministry,” said Ms Davison. “Lay presiding of the sacraments is an issue for other denominations.”

“Their big gathering opportunities are at annual Picnic Race events. Where is the church? Back in town running worship.”

“Sporting clubs in mining towns will often need to forfeit matches due to unavailable players and congregations need to use appropriate resources (for studies etc) that will not disadvantage people for missing a session or two.”

The congregation in Moranbah have adopted two strategies to deal with that.

“One has been to provide particular support for the partners and families of miners, and the other was to change their regular service times to an evening.”

“Being church in a rural setting forces you to think outside the square,” he said. “The bigger challenge at the moment is probably how to be more effective as a church in dealing with the changes towns are going through as more mining companies are entering the town.

“There is always the fear of good farming land being used for mining but also there are many workers living in town during the week who leave town on weekends – how can we as church reach out to those families?”

Church outside the ‘box’

Mr Kruger has high hopes for the rural church but said, like city churches, they needed to rethink their notion of the church.

“In many cases it would be better to sell the church building and do church simply, maybe use shared facilities or coffee shops.

“We remain strong in our faith and look for possibilities to be more effective in sharing Jesus with the world.”

“The communities are very transient, particularly the mining and agriculture sectors, with fly in, fly out workers or seasonal casual workers.

“Many congregations have temporary members while they live in the area but they are subject to transfer and re-location.”

“Twelve hour mining shifts and the associated four days on, three days off shift rotations are not good for family life,” he said. “Many high school students do not seek tertiary places because they can get a good paying job with the mine company.”

“They are subject to such things as deregulation of industries (dairy and beef), commodity prices (cotton and grains), and even the price of coal.”

"We take a lead role during and after traumatic events by providing Psychological First Aid, face to face counselling, financial counselling, suicide and bereavement support,” he said.

Frontier Services’ Flinders Patrol minister Peter Harvey said people in ministry are often the first to recognise and provide a space for people in rural communities to deal with mental health issues.

But mental health issues are not the only health issues that plague rural communities. There are also a high number of farming accidents and deaths each year.

“Farming accidents generally happen because people are so overworked,” said Mr Harvey. “Where things aren’t going so well is where mental health issues are more prevalent.

“Being able to get out there and provide support in situ has been a big thing in a number of situations.

“Being able to get out and be part of their life has been a great thing.”

Blue Care’s Director of Mission Colleen Geyer said in many towns Uniting Church agencies, staff and services are the lifeblood of the community.

She said Blue Care is often the town’s largest employer and only provider of aged care.

“Whether it’s caring for people in their homes, providing respite activities for clients and their families, offering allied health services or providing residential facilities Blue Care supports people where and when they need care,” she said.

Call for a ‘theology of the bush’

Mr Hardingham said there is a need to develop a rural theology that does not stand over or against current thinking, but becomes a vital ingredient in the ‘great stew of theology’ that makes up who we are and who we understand God to be.

“It begins by making sure that in our training for ministry we create models that give rural students the opportunity to undergo rigorous theological training without forcing them to move and live in the city,” he said.

He also suggested setting up a rural placement to help prepare all candidates for rural ministry.