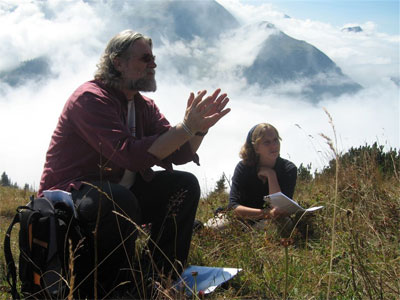 A fresh exploration of the Beatitudes of Jesus is emerging as a grass roots international movement, starting in Queensland.

Plan Be author Dave Andrews worked with the Bible Society Queensland to launch a new collection of resources at Easterfest in Toowoomba.

The We Can Be concept is based on a modified version of the serenity prayer: “Lord, grant me the serenity to accept the people I cannot change, the courage to change the one I can, and the wisdom to know it is me!”

The Beatitudes have for many years been relegated to either the too hard basket or interpreted through idealist terms.

Plan Be rescues the Beatitudes from their obscurity as a poetic introduction to Jesus’ Sermon on the Mount and reframes them as a set of radical ‘Be-Attitudes’.

“To quote these Be-Attitudes is religious, but to act on them is revolutionary,” said Mr Andrews.

Mr Andrews was invited to speak on the Beatitudes at the Greenbelt festival in the UK in 2007 after having led a study in the Swiss Alps sponsored by Servants. The response at Greenbelt was phenomenal.

Thousands of people were looking for ways to act out the teachings of Jesus in every day life, in ways that would change attitudes and make the world a better place.

Inspired by the response Mr Andrews published Plan Be, a little pink book with a readable and doable message.

“There’s a move among Christians to recover a focus on social change through personal transformation found throughout history in movements like the abolition of slavery,” he said.

The Bible Society collaborated with the Queensland Synod of the Uniting Church, TEAR Australia, and Capacity Builders (a Christian PR and consultancy firm) to develop a suite of resources that would help people engage with the Beatitudes in more depth.

The resource package, now available to churches, schools, and small groups, includes a condensed version of the book, a small group guide for action and reflection, a journal, a DVD with a promotional one minute video and a series of on-the-street interviews, and much more.

The Plan Be resources, designed for Queenslanders, are being picked up throughout Australia and in other countries, including New Zealand and the UK.

Plan Be, the book, is available in most Christian bookshops. Plan Be resources can be purchased from the Bible Society in Queensland.

Duncan Macleod, Queensland Synod Vision for Mission Advocate, worked with Mr Andrews on the Good Be Group Guide, trialling it with members of his own congregation. Learn more about the We Can Be movement at wecan.be

Photo : Dave Andrews preaches the Sermon on the Mount in the Swiss Alps. Photo courtesy of wecan.be