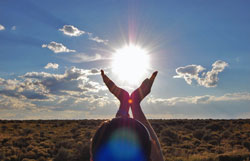 THE PRACTICES of meditation and yoga are often thought of as part of Eastern religions.

“There are some wrong notions about yoga,” he said.

“Some call it a new age concept or Hinduism or devilish.

There is no basis for this.

“Yoga is a branch of Indian philosophy and falls into the nontheistic group of philosophy.

“Christian church leaders make use of yoga for health and vitality and add to it a Christian faith dimension.

“Other faiths, such as Hinduism and Buddhism, long ago absorbed yoga and meditation as part of their faith practice.”

Dr Manoharan said the word yoga is derived from the Sanskrit word “yuj”, which means to join, unite, combine or integrate.

“In Christian terms it can be described as ‘yoked together’.

He said the congregation were supportive from the start, but the program required careful planning and implementation.

“After taking time to build relationships with the congregation and with the ecumenical ministers’ fraternal, I eventually shared my concept and meditation program in order to gain their support.

“I also invited anyone who may have had doubt, or perhaps needed more information, to come and sit as an observer.

“The word travelled around and the program became an evangelistic tool reaching out to the non Christians to experience
shalom in their life.”

Congregation member, Megan Evans, said the classes were an important part of her faith practice.

“Firstly, there is a time to relax and then stretches to prepare for yoga postures.

“After a series of postures … we have breathing and Christian Meditation exercises.

“Numbers grew throughout the year with people joining us from other churches and the wider community.”

“There is also a longing to experience God,” he said.

“One of my main objectives is to see how the spiritual traditions of East and West can enrich each other.

“The major concept for participants of the program is ‘let go, let God’.

“Christina yoga can also cure and prevent some common illness and that is one of the reasons I started this program and wrote a book on Christian Yoga and Meditation.”

“Mediation is not something we do; it’s something the Holy Spirit does in and through us,” she said.

“Meditation is really about developing your relationship with God in a whole kind of way.

“If we want to be close to the heart of God we have to be willing to listen to God as well as speak to him.”

Ms Sargeant said although meditation is quite foreign to many people, it has been a central part of Christian devotion
throughout the centuries.

“It wasn’t foreign to the authors of scripture at all,” she said.

In her meditation classes the first thing she does is give people a handout of scripture quotes about meditating.

“In the gospel it is often referred to as prayer, that Jesus went up the hill to pray.

“I’m quite certain that wasn’t just a one-way prayer.

“It was listening to God and a reconnecting when he was tired, because he was human.

We have to remember that.”

Dr Manoharan agreed. “There is no rigid demarcation between prayer, meditation and contemplation,” he said.

“All these may be happening in prayer.

“We may say that the words of my mouth as oral prayer, the meditation of the heart as the prayer of the heart, and
contemplation as pondering over or communion with God’s presence.”

Ms Sargeant said she felt people were yearning for a deep spiritual connection with God and that practicing meditation is
one way of finding that.

“It is a spiritual discipline,” she said.

“You only need to practice when you’re beginning five to ten minutes a day and gradually you’ll become more comfortable and you’ll want that time.

“In the Christian life there needs to be a balance between contemplation and action.

“Meditation is contemplation with a focus.

Focussing on God is really what it’s about.

“It’s just a door that we open to experience God.

There are thousands of ways that human beings experience God.”