Home > Features > Poverty and the soul

Poverty and the soul 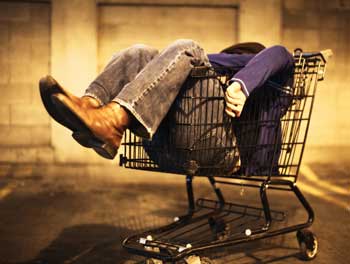 OFTEN WHEN we think of people living in poverty we don’t think of the family or pensioner next door.

United Nations statistics that half the world lives on less than $2 a day and that 30 000 children die every day due to poverty are terrifying and can overwhelm us, particularly those of us who have safe housing and three meals a day. But poverty is also on our doorstep.

Director of UnitingCare’s Centre for Social Justice Greg Mackay said many Australians are closer to homelessness than some may think.

“For people living on the margins just one episode of illness is all it takes to push them into a downward spiral of debt and poverty,” said Mr Mackay.

“If even marginally better off people were to experience a second or third financial stressor they too would struggle.”

“Recent research by the Australia Institute shows women as one of the groups hardest hit by the financial crisis in the workplace. More men have lost full-time jobs but women face worsening underemployment in the form of limited hours and poor pay.”

“Having spent the last four years in Thailand, and seeing both excessive wealth and incredible poverty existing side-by-side in relative harmony, I have seen financial poverty in a new light,” Mr MacGregor said.

He believes Jesus’ statement “Blessed are the poor” speaks of a far more serious poverty than lack of money.

“It is speaking of a spiritual poverty of the soul, the importance of which far exceeds any financial poverty,” he said.

“It is the poverty that comes from realising our utter spiritual bankruptcy outside of Christ.

“Our response as Christians, to the physical and financial poverty that faces so many people in our society, is then a response to God’s grace in our own lives.

“It is not an act of pity or empathy but an act of spiritual obedience.

“My evangelical responsibility is to not only share the good news about Jesus but to put my money where my mouth is, that others may not just hear, but also see the God who loves them.”

“Why is it when we think about doing something about poverty we tend to think of what the church can do, rather than thinking about how I can live my life so that I am part of the good news for people who are struggling?” he said.

“That means that we are committed to living here long term, to sending our children to the local state school, to being involved in the local community, to building relationships and practising hospitality with the people around us, and committed to trying to be salt and light both individually and as part of God’s church.”

• seek to be a person of Good News in how you live your life
• move to an area that has elements of disadvantage
• commit to living there long term
• commit to sharing your life with the people around you
• watch the Holy Spirit at work.

“Our most important contribution to being Good News to the poor is us,” said Mr Cornford.