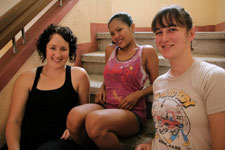 IT’S NOT every day you see a music video featuring the people the song is about, especially when the song is about a young Filipino prostitute. But that didn’t stop Brisbane band, Remember Seven, launch a video clip for their song Red Lit Stage in September.

Indeed, the band usually goes against the norms of the music industry, not because they want to be different, but because the members of Remember Seven are called to write music about the issues and people who matter to them. The band helps fund several projects including the Mwandi Orphans and Vulnerable Children Centre in Zambia, and Isaiah’s Home of Love, a home for orphaned and abandoned babies in Bulawayo, Zimbabwe.

When it comes to songs about topics like prostitution, HIV/AIDS and starving orphans, our airwaves are silent. Even the Christian music scene is somewhat lacking in this area, as was evident when Remember Seven were told that their lyrics were too deep during a recent Christian band competition. Yet, they continue to sing messages of justice, hope and faith.

After many trips to Africa and America, Centenary Uniting Church member and one of the songwriters in Remember Seven, Katie Wallis, was inspired to visit FOCUS over Easter 2010. FOCUS is an NGO working to free women from prostitution in Manila in the Philippines.

“We landed, dropped off our bags and went straight to bars and brothels to sit with these young girls,” said Ms Wallis. “I saw a bunch of girls get up and dance for their lives; to seduce potential customers. Each girl would put on the same pair of shoes to perform. It was one of the most horrific nights of my life seeing girl after girl after girl get up and stare at me with dead eyes. I wished they could experience life in my shoes and I knew, having seen the shoes they wear every night, I couldn’t do nothing about their plight.”

In that moment, Ms Wallis had already started writing the song Red Lit Stage and one year later, thanks to Red Earth Films, she returned to the same Manila brothel to film a video clip starring one of the young women who danced that night. Red Earth Films Co-Director and former Uniting Church Youth Worker, Jason Bray, took Ms Wallis to Africa on the 2007 Global Walking trip. That trip changed her life and how she saw the world.

“Jason has played a major role in my life, opening my eyes to issues of justice and challenging my views of who God is and how He is present with, and in, the suffering,” said Ms Wallis. When she heard that Red Earth Films was filming a documentary called Street Dreams, following organisations helping young women out of the sex industry in South-East Asia, Remember Seven offered them their music for the soundtrack. Mr Bray and Co-Director Mike Crowhurst felt the song Red Lit Stage captured the heart of the film and offered to do the video clip.

“The inspiration from Street Dreams comes from the same dingy brothel that inspired Katie to write Red Lit Stage,” said Mr Bray. “When I saw the young girls in that bar I knew there was a story of injustice going on that needed to be told.

“I knew I wanted the last part of the documentary to feature everyday Australians using their gifts in their struggle against the sex industry. I asked Katie and her guitarist, Joy Stovall, to come to the shoot and they were gracious enough to say yes.”

Ms Wallis had mixed emotions about returning to Manila and seeing the young dancer and would-be video clip star, Diane, she befriended a year earlier.

“Meeting Diane again was bittersweet,” she said. “It was lovely to see her beautiful face, but devastating to know that, in the year since I had last seen her, her life hadn’t changed even slightly. She was still dancing every night, seducing every night, wearing cheap shoes every night in a dark, dingy bar.

“I was sitting again in the filth with stale beer still hanging in the air, seeing the face of a young girl who was beginning to realise that perhaps she was created for more than endless nights in this hellhole. Every emotion captured in the clip is that much more real because that was where it really started for me.”

But there is still hope for Diane. “The day we filmed the clip Diane was not a prostitute, she was an actress portraying the nightmare she lives every day but hopes to escape from,” said Ms Wallis. “We learned that FOCUS is working with Diane to find a suitable school for her to finish her schooling so she can begin a barista certificate. She has dreams beyond her current situation which are almost within her grasp.”

Remember Seven will be funding Diane’s schooling and Ms Wallis hopes she will experience life in new shoes and no longer be called Diane (her prostitute name), but Mary-Jane, her birth name.
Mr Bray said, “Like everything in the Philippines, the shoot was dramatic.

“Katie, Joy and director/ cameraman, Mike, spent about an hour talking about the concept and three hours filming it,” he said. “There was a monsoon outside and I almost electrocuted myself in a puddle of water next to the sound system in the club.”

He said, like the video clip, the Street Dreams documentary (currently seeking completion funding) helps humanise the victims of the sex trade.

“We want to introduce viewers to the Mary-Janes of the South-East Asian sex trade and, hopefully inspire people to help them.”

Ms Wallis continues to be inspired, challenged and captivated by her friends living far below the poverty line.

“They inspire me. They move me. They never cease to show me who God is,” she said. “My hope is that I will spend the rest of my life in pursuit of ways to live in true community with them, sharing their burden and encouraging others to do the same. I have a heck of a lot to learn, but I always have hope.”

Visit
Street Dreams
See a preview of this moving documentary at www.redearthfilms.com.au