Reading the bible through new eyes 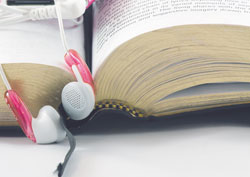 WE, IN THE Western World, live in a time and space that has been moulded by the concept of modernity and a scientific world view.

But do we realise when we read Scripture that the places we have come from – our cultural heritage, church tradition, the
understanding of the world that we have been schooled in, our family etc – influence how we interpret and apply this “unique and apostolic testimony” to our lives as Christians in community with one another?

In some ways this is how it should be.

Our interpretation of Scripture needs to be relevant to our own time and context, but realising that other people’s contexts are different from ours can open up Scripture in surprising and exciting ways.

During the Protestant Reformation reformers like Calvin rejected the emphasis on the tradition of the church, found in the Catholic Church, in favour of a doctrine of Scripture that emphasised the work of the Holy Spirit in the formulation of Scripture.

This development in theology coincided with the rise of humanist thought, scientific method and individualism and has influenced how people read Scripture in the West today.

At the beginning of the Twentieth Century there were two main conflicting biblical interpretive camps.

The first was that Scripture is Holy Spirit inspired, therefore inerrant and therefore authoritative on all subjects, including science and geology.

In essence, Christian scholars taking this approach were buying into the modern ideology of rationality.

Instead of seeking understanding through faith, these scholars sought to prove the Bible was authoritative by proving, scientifically, that everything it said on any subject was scientifically as well as spiritually true.

This approach is still found in arguments surrounding intelligent design’s place in the biology curriculum.

The second camp looked at Scripture as merely a by-product of its time and place.

Scripture, in this instance, lost its place as the ultimate authority for Christian life and became a kind of sourcebook from which passages deemed as keeping with modern thinking were praised and those deemed primitive dismissed.

Both these camps accepted the modern world view of a scientific, rationalist approach.

I too am a product of this rationalist, modernist approach to Scripture, although I do not see myself in either of these two camps.

This was made clear to me while I was teaching a unit for Yalga Binbi, the Uniting Aboriginal and Islander Christian Congress training organisation for Indigenous leaders in the Uniting Church. School, university and theological college all reinforced a certain world view for me: read (or watch or listen), analyse, interpret, summarise.

During the week that I taught this course in Worship and Preaching I realised how close, and unexamined, this approach
to understanding the bible is to me.

The course was fantastic.

Eight leaders of churches from the Indigenous communities of Aurukun and Napranum participated.

What struck me was how different some of the groups’ approaches to understanding and applying the Scripture were to
mine.

My world is one of analysing and abstracting general concepts.

The world I entered was one of story and sharing – there was a spiralling circularity to the conversations.

These are stories and links to Scripture that come from their cultural ways of understanding the world and my Christian
journey was richer having heard these stories and being challenged about how my own world view shapes my interpretation of the Scriptures.