Home > Features > Remembering those who serve

Remembering those who serve 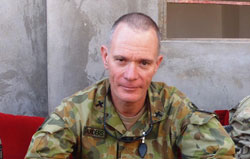 UNITING CHURCH Minister, Rev John Saunders, is on active service as a Chaplain with the Australian Army in Uruzgan Province, Afghanistan, where he has been since mid-June this year.

When he arrived in the Middle East it was the height of summer with temperatures between 40- 50C.

By the time he leaves he will have been through a winter with temperatures as low as -15C.

In 2001, when he was an Educational Corps officer in Darwin, Mr Saunders heard the call of God into ministry and military chaplaincy.

From his post in Afghanistan, he said that going on deployments to exotic, but dangerous, places is par for the course in military service and represents the ultimate goal of serving in the Defence Force – to be on active service, defending the nation and helping bring peace and stability to places in the world where such concepts exist only in dreams and hopes for the future of war-weary people.

Back in Australia Mr Saunders has a very patient and accommodating family.

His wife Jan, son Michael and daughter Jessica, live in Brisbane while John works in Townsville as Padre of 2 RAR when in Australia.

“To say it’s not easy is an understatement,” he said.

But this is the reality of the sacrifice many Defence Force families make on a regular basis.

Going on deployment and the resultant dislocation from lovedones is something many members have to endure and it can take an immense toll on family life.

When it comes to military ministry Mr Saunders said he ministers to people, just like he did at home in congregational ministry.

The only difference being that his “flock” wear a uniform, are often not all that religious, and work in a dangerous environment thousands of kilometres away from home.

“I help people with personal problems, family needs, work stresses, dealing with combat, and the spiritual explorations which these hardships inevitably throw up,” he said.

He is also actively involved in inter-religious dialogue with local Muslim leaders, a very rewarding and enriching part of his role.

When asked why we have Christians in military service and how relevant it is to have military chaplains in the modern army, Mr Saunders said despite Australia existing as a post- Christian culture, that in no way means the search for meaning and spirituality is diminished.

“The fact is we are there ministering to men and women, bringing comfort, hope, and a listening ear, irrespective of whether the people we serve are religious or not,” he said.

“This is an exciting thing – to live on the cutting edge of faith in a world where many see faith as out-dated and unnecessary and to hold the beacon of that faith to men and women who literally put their lives on the line to serve the interests of others.”

With Remembrance Day around the corner (11 November), Mr Saunders asked Church members to not only grieve for the loss of lives cut down in their prime in wars past and present, and pray for peace in our world, but to also remember to support those who continue to serve, believing that they are making a difference and making life safer and more stable for the people in the lands they serve, through prayers, letters, emails, and care packages.

According to news reports 34 Australians have been wounded in action in Afghanistan this year, most recently five in Uruzgan Province, including the death of young Private, Matthew Lambert.

“Both Remembrance Day and Anzac Day are significant days for those of us who serve and those who have served,” Mr Saunders said.

“We will mark the occasion with memorial services here at Tarin Kot and in the bases throughout Uruzgan Province.

“To those who have lost lovedones both over here and in past conflicts, particularly Matty Lambert’s partner and family, the
most I can say is that we who are on active service feel your loss in that we have lost a mate, a coworker, a fellow-soldier and it hurts us.

“The diff erence is people at home can grieve – we cannot, yet.

We have to gather ourselves, go outside the wire and do it all again the next day.”