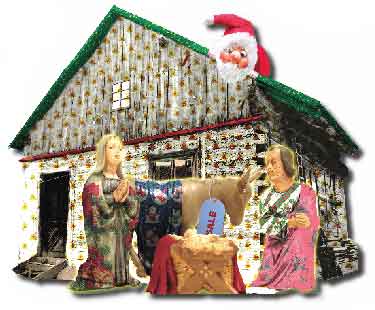 Sitting somewhere between Jesus and the tooth fairy is a jolly round man who has captured the hearts of our community.

As 21st century Christians scratch their heads, what was once a holiday to celebrate the birth of Jesus Christ has become a consumer binge which escalates to new heights every year thanks to K-Mart, Myer and a mailbox stuffed with catalogues.

The last weeks of December see an increasing panic as crowds take advantage of extended shopping hours to gather at the shrines of capitalism to acquire potential landfill and increase consumer debt.

While the earliest Christians captured the pagan festivals to bring the presence of Jesus to the community at large (we don’t know the real date of his birthday), modern Christians struggle to promote the distinctiveness of the Christian message at Christmas.

Many Uniting Church people are still positive about the potential for the Christian message to come through at Christmas. Emmanuel Uniting Church minister Rev John Cox believes that in Christmas gift giving we have a symbol of offering ourselves to others.

“While rampant consumerism is the flavour of Christmas for many, if we in the church are willing to see the potential of the season we have a lot to work with,” he said.

While few are keen to say “Bah, humbug” to Christmas, Uniting Church Youth Worker Robin Yang thinks the church has given in to consumerism and hasn’t made a strong enough stand on what it means to be a Christian.

“People still connect with the Jesus story and the increased church attendance at Christmas services is a sign that the search for spirituality is alive in the community. But the church can do better in the way it taps into that.”

While the legendary Saint Nicholas was reputed to have distributed gifts to the poor at night through their windows, his successor Santa Claus encourages the acquisition of cheaper and cheaper technological goods that would have been unimaginable a few decades ago.

Children who once sat around the radio with their parents listing to the Queen’s Christmas Message now watch their own children captivated by iPods and Playstations, while those who engage in alternative gift giving are often viewed by family members as eccentric, if not decidedly weird.

Broadwater Road Uniting Church minister Rev Bruce Johnson said he and his wife had deliberately not promoted the idea of Santa Claus when their children were small.

“We wanted to be able to share the Christian story of Christmas and knew that it was easy to get carried away with the Santa Claus thing and forget the true story.

“What we do to children is teach them about the Tooth Fairy, Easter Bunny, Santa Claus and God and as they get older we say they’re all made up and the only one who is real is God and you can’t see him.

“We wanted to capture the joy and fun in the Santa Claus story in our gift giving without making belief in a mythological person centre stage.”

Caboolture Uniting Church minister Rev Rob Brennan explained that the origins of the word “Christmas” are from the old English word meaning “Christ’s Mass” which refers to the observance of the Lord’s Supper or Mass which marked the celebration of Christ’s birth.

Silent Night, one of the all-time favourite Christmas carols, invites us to take time out from the frenetic pace of our lives and meditate on the real meaning of Christmas.

Writing in the 16th century Martin Luther claimed that the Christmas Gospel is so clear that there is little need for scholarly interpretation.

“It is only necessary to ponder it well, to contemplate it, and to take it completely into your heart.

“None will derive more benefit from it than they whose hearts hold still and who divest themselves of material considerations and concentrate diligently on it.”

More than just a commercial transaction, the Christ child was God’s gift to the world, but do we hear that at the shopping mall?