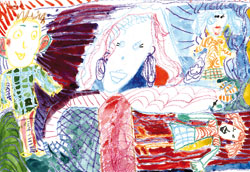 PEOPLE all over the world are searching for a sense of belonging.

A National Church Life Survey (NCLS) report determined that inclusion is one of nine core qualities of vital church Life.

The report, The Role of Innovation in Church Life and Health, released in March 2010, states that innovation inspires belonging when it comes to church attendance.

“Research shows that churches where attenders said that there was a willingness to try new things also tend to have higher levels of both belonging and growth in faith.

“Being a vital church is more than just growth in the numbers of attenders.

At the heart of any church are relationships with God, between church attenders and with people in the wider community.”

According to NCLS, growth in faith and belonging to a Christian community are intimately connected.

“Churches should function as spiritual families where members experience friendship, share life, struggles and hopes and contribute their gifts,” said the report.

The book The Spirit of Generation Y: Young People’s Spirituality in a Changing Australia by Michael Mason, Andrew Singleton and Ruth Webber exposed the challenges facing those born between 1981 and 1995 regarding faith and belonging.

Released in 2007, the book looks at the individualistic and consumerist world these young people have grown up in and how that affects their search for spiritual belief, or lack thereof.

They found that 71 per cent of those surveyed are not involved in any kind of community service in a typical month – whether
fundraising, signing a petition, or collecting for a charity – and do nothing for others apart from close family and friends.

That figure includes 51 per cent of the young people who identified as being active Christians.

The book suggests there is a link for many young people between a belief system and what it means to be a good citizen and asks who, apart from parents, would pass these values on to them.

Perhaps this is where local churches with members who are active in the community can demonstrate service and encourage a sense of belonging as a community of faith.