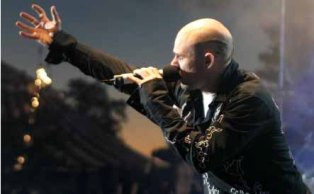 The band Soulframe has graced stages of numerous festivals (including the Australian Gospel Music Festival and the National Christian Youth Convention), won major song writing awards throughout Australia, have supported some of the big names in the international music industry, just released their second album and had their website declared the most visited band website in Australia (tipping Hi5 off the top spot).

But only in the last six months has the Gold Coast four-piece become a household name with lead singer Guy ‘Mutto’ Mutton performing on Australian Idol.

Mutto, as he is known, got to the final nine and, since leaving Idol, has hit the ground running to get the most from his Idol experience.

When Journey spoke to an exhausted Mutto just days after leaving Idol, he was firmly focused on the future for Soulframe and reflected on his Idol experience from the perspective of his faith.

“The song choices I made, I was thinking beyond Idol. Idol is the vehicle for life beyond it really and I wanted to be able to do a bit with how I was going to be perceived when I came out. I was sort of thinking of it as a platform for the future.”

Mutto’s Soulframe band members were some of his biggest supporters during Idol. “The original plan for entering Idol was that Soulframe was at a bit of an emotional hump,” said Mutto.

“We felt like we were pushing down doors and nothing was really opening up for us. We had a fair bit of interest from a label in the States and that kind of fell through.

“Then the Idol thing came up and I thought it would give people an opportunity to get to know me and get to know my voice and hopefully transpose into the band getting a bit of exposure.

“Initially there was a bit of uncertainty in terms of the band but we all thought about it and talked about it and realised that it could be a really good opportunity for us and so they have been very supportive.”

If Mutto had won Australian Idol he would have been under a very strict contract that would no doubt bill him as a solo artist but that was a risk Soulframe was willing to take.

“Obviously it is a very uncontrollable outcome. If I would have won it, that was going to present a new set of issues. But we talked through that and they were all ready to jump on the band wagon whatever the outcome was.”

Australian Idol is at the top of the pop culture food chain; watched by more people than the football grand final. In such a setting it was interesting to see a number of the final twelve Idol contestants were clearly Christians.

“There was a fairly strong Christian culture in the Idol experience. Erana Clark the vocal coach is a Christian and one of the backup singers is a Christian, so there was a lot of prayer happening and a lot of relying on the Lord, particularly before performances, praying with each other.

“Christianity is always one of those things that, potentially in many minds, can create a certain persona or a certain stigma attached to it. The Christians in the house are very mindful of that and tried not to force it down anyone’s throat, but still live their life.

“Like, Dean and I, we’d sit together and talk about things and pray together and read our Bibles together and just try and live life, not with any agenda but just live.”

During the program Mutto decided to write a word on his hand to help him express his meaning and to remind himself what each song meant to him.

So with Mutto out of Australian Idol the band is making the most of their new found fans and working hard to promote themselves both in the mainstream music industry and the Christian music industry.

While the band walks the tough roads to success in the music industry, fans can sit back and enjoy the ride. We have not seen the last of Mutto and Soulframe. This, I suspect, is only the beginning.

Another Australian idol contender Jessica Mauboy is a member of the Indonesian Missionary Uniting Church in Darwin.

Rev Mauboy said since she was two years of age Jessica would grab a lime from the fridge and put it on her hands and mouth and "Was always singing, singing, never stopped."

"We believe she is the next Australian Idol, I think.

"We trust our God and every Sunday we have a special time of silence for two or three minutes and pray for her before she goes on the stage.

"She does too. She said, ‘I’m praying that God can look after me and I can sing well because it is a very special gift from God’."