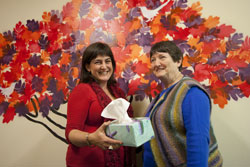 IN APRIL, in response to the flooding in Brisbane in January, a few Uniting Church members opened a support centre to help community members suff ering from grief, pain, bereavement, and life direction and relationship issues.

Based at the Indooroopilly Uniting Church, the centre is located opposite one of Queensland’s largest shopping centres.

Convenor, Rev Ruth Hill, a retired deacon, said the location makes it easy for people to drop in.

“We’re only a bus or train trip away.

She also emphasised that the purpose of the centre is not to try to solve problems, but to listen and let people share their stories.

“I had a lady who came in and she had lost her dog to cancer,” Ms Hill said.

“She really didn’t know why she was here exactly, except that she was hurting.

“I said ‘tell me about your doggie’ … and when she left she bounded out of the church,” said Ms Hill.

Dr Tracey Burgess-Limerick, a registered psychologist who volunteers at the support centre, said that at the start of the year setting up such a centre seemed like an impossible task.

But after plenty of prayer and the determination of those involved (especially Ms Hill), they were off and running.

She agreed that listening was the best medicine.

“We’re here to listen to you, to walk with you and help you fi nd your way,” she said.

Dr Burgess-Limerick said that by the end of the workshop all participants were well and truly on board.

“It’s about just being happy first and then you will do amazing things, you will have everything you want.

“It’s so simple and it’s so obvious and we all know it but to actually hear it is quite powerful.”

Ms Hill said the Support Centre is something that other congregations could also do to help those in the community who are feeling blue, but the most important thing was to do what you feel called to do.

“You have to work with what you’ve got,” she said.

“When you have five [people with] PhDs show up at your meeting you work with them.”

Dr Burgess-Limerick said, “It’s about finding the gifts that people have and having fun with it and not overwhelming them and asking for more than what their gifts are.

“I think one of the talents that we’ve got is coaching people when they get passionate.

Ms Hill said it is important to share ideas and knowledge across the Church and the community.

“My hope for the future is that we’ll be able to say to the church, and to the Presbytery as a whole, this is what we do here, what do you do there?” she said.

“How can we work in with you?

“What can we do for you that you can’t do for yourself?

“And what can you do for us that we can’t do for ourselves?”