Home > Features > Should God get a vote?

Should God get a vote? 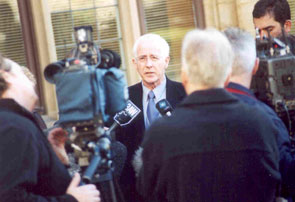 With family values, abortion and intelligent design firmly on the political agenda the Australian community is reassessing the role of religion in Australia’s political life.

While conventional wisdom was never to mix faith and politics, both the Prime Minister and Federal Treasurer have participated in media saturated attendances at the Hillsong Church in Sydney, and the Family First party with its strong Assemblies of God connection has campaigned successfully in both state and federal elections.

While the Australian Constitution prohibits government from imposing religious observance and states that religious test will not be required as a qualification for office, Tony Abbott, Peter Costello, Kevin Rudd and even Prime Minister John Howard wear their faith credentials on their sleeve.

Mahatma Gandhi claimed that anyone who says “religion and politics don’t mix understands neither one”, and self-proclaimed Christian Socialist and Shadow Foreign Minister, Kevin Rudd believes religion is back on the Australian political agenda.

“I come from a long history of people who have spoken about the relevance of their faith to their political beliefs.

“I think what we’ve seen in recent times is an increasing trend, both in the Liberal Party and other minor parties, to try and commandeer God for their own political purposes.

“I think it’s time that those people who have a view of faith from the other side of politics actually spoke out and dealt with this challenge, and I’ve therefore got a responsibility and others of faith within our political tradition have got a responsibility to start speaking out, and that’s what we’re trying to do.”

Lecturer in Religion and Politics in Australia at the Australian National University Professor John Warhurst said religion has regularly appeared in many political contexts over the last five years.

Prof Warhurst points to the election of Family First party member Steve Fielding at the 2004 federal elections as a sign of the political influence of evangelical Christians but Kevin Rudd is leading a left-wing fight back.

“I think it is important for those who would support the Family First party to know what their organisational basis is, where their funding comes from and their personnel … But we [the Labor party] will not for one moment stand idly by while either the Liberals, the Nationals or Family First assert that God has somehow become some wholly owned subsidiary of political conservatism in this country,” Mr Rudd told Meet the Press after the last election.

Professor Warhurst said churches continue to be active participants in political debate. “There has been continuing church debate over issues such as IVF, abortion, homosexuality and euthanasia. There has been attention drawn to church responsibility for child abuse and the stolen generation.”

The Uniting Church is renowned for its passion for justice and social responsibility, and leaders from both Synod and Assembly are regularly responding to a range of political issues such as treatment of refugees, children in detention, anti-terror laws, industrial relations law, gambling and poverty.

Controversial retired Uniting Church minister Dorothy McRae-McMahon said there is an ultimate irony in the attempts of mainstream churches to enter political debate.

“Howard in effect tells them to ‘stop meddling’ while at the same time taking advantage of what he sees as their capacity to deliver cheap welfare,” she said in her commendation of Marion Maddox’s book God Under Howard: The rise of the religious right in Australian politics.

“If we live that calling out we will inevitably find ourselves caught up in politics,” he said.

“Both Jesus’ birth and his death occurred in the midst of political events, so the question for us as followers of Christ is not ‘should we get involved’, but ‘rather how do we respond’ when we find ourselves involved in politics.”