Home > Features > The Politics of Food

The Politics of Food 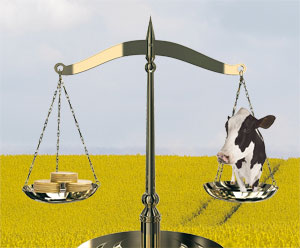 WITH OBESITY and eating disorders on the rise and the apparent abundance of food in Australia it is hard to think that the lack of food (and its production and distribution) in years to come is already shaping the policies of the world’s most powerful governments.

And it’s hard to imagine that something as simple as what we eat can change the way the world works and the way governments legislate.

Agri-food expert and Head of the School of Social Science at The University of Queensland, Professor Geoffrey Lawrence, told The Courier-Mail that food prices will skyrocket by about 50 per cent over the next decade.

Dr Lawrence was speaking at the Global Food Futures Forum in Brisbane last September and said the increase in food costs will put food security at the top of national and international political agendas.

Take into account the United Nation’s predicted global population increase from 6.8 billion in 2010 to nine billion by 2050 and food may be the most valuable commodity in the years to come.

Perhaps even more alarming is that a 2009 report to the UN’s Economic and Social Council said population growth is expected to rise in the “least developed countries” that are even now struggling to feed their population.

This raises many justice issues as well as food security issues.

In the paper Food security explained: issues for Australia and our role in the global challenge the CSIRO said in the next 50 years the world will see a 70 per cent increase in the demand for food which will be driven by population growth, economic development, dietary changes and consumption levels.

“Australia doesn’t currently have a problem feeding its own population but has a humanitarian interest in food security and stability for developing countries,” the report stated. “Australian agricultural exports support global efforts to achieve food security.”

The history of some foods touched on in Food Inc., which explores the industrialisation of food production in America and its effect on the environment, health, economy and workers’ rights.

The film reminded people that when margarine was invented, consumers demanded it be bright pink so everyone knew it was not butter.

New York Times food writer, Mark Bittman, said during a TED (a nonprofit group devoted to “ideas worth sharing”) talk filmed during the 2007 European Group for the Study of Deviance and Social Control Conference that between 1950 and 2000 the world’s population doubled, yet “meat consumption increased five-fold”.

“After energy production, livestock is the second highest contributor to atmosphere-altering gases. Nearly one-fifth of all greenhouse gas is generated by livestock production – more than transportation.

“Half the antibiotics in this country [America] are not administered to people, but to animals.

“Now, I’m no more anti-cow than I am anti-atom; but it’s all in the way we use these things.”

Then there are issues such as the ethics of genetically modified (GM) food and seed patenting by multinational companies. While technological advances have led to amazing things like longer shelf-life for GM fruit and vegetables, a greater resistance to pests and viruses, and even higher nutritional values, the potential risks to health and land development are unknown and ethical concerns are being debated across the globe.

“It’s a whole range of things like improvement of livelihoods and building community resilience,” he said.

And each country will have to deal with food security in its own way.

“For PNG, where you have a whole lot of subsistence and semi-subsistence agriculture, food security is primarily addressed by lifting productivity.

“The further you get away from subsistence you also have to address issues of more effectively functioning markets and building community resilience to impacts such as a sudden drought or unexpected catastrophe.”

He also noted more longterm factors like the HIV/ AIDS epidemic in PNG and Africa, which is removing the most productive age group of potential food producers.

“It also denies the following generation the food production skills,” he said. “Our capacity to feed a population that has more than doubled in half a century has been due to technological advance
and more effective use of resources.

“That has been highly dependant on petrochemical resources … and there are varying views on whether we have reached peak oil.

“Globally as we face a situation where we have to feed a significantly larger number of people our capacity to do that will eventually decrease.

“We’re facing a real issue here,” he said. “There are things you can do. Awareness and knowledge are important.

“We also need to start to develop a coherent policy response to these issues.

“This is probably going to be impacting in our lifetime and definitely in our children’s lifetime so we really need to raise this issue with our elected representatives as a policy priority.”

Michael Pollan, author of In Defense of Food, also has some good advice:
“Eat food. Not too much. Mostly plants.”