Home > Features > The road to recovery

The road to recovery 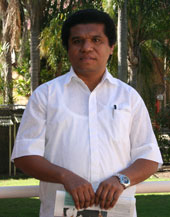 Independence in East Timor was a long time coming. Forgiveness and restoration may be an even longer road, but as this small country navigates the way, the lessons learnt will be invaluable for those involved and for those watching.

Agustinho de Vasconselos is a minister in the Protestant Church in East Timor and a member of the Commission for Reception, Truth and Reconciliation in East Timor.

The Commission is a non-government body that advises the government on ways to move forward in the peace process. Rev de Vasconselos sees the country’s history as a valuable tool.

“Sometimes East Timor people look in our past. It is sometimes very hard because for 450 years we were colonised by the Portuguese. After Portuguese left, we were invaded by military Indonesia. So already there were so many conflicts not only political leadership. That is why it is very important to the Commission to learn from the past so we move to the future.”

At the height of the struggle for independence in 2002, Rev de Vasconselos was President of Youth Department of the Protestant Church in East Timor. He said the feeling among the youth of East Timor has changed.

“They feel different because it is free. There are no questions so everyone can express their thoughts. Now you can walk around East Timor, no problem. Before, if you did not have a travelling permit, you couldn’t get around. It was very dangerous for us.

“For twenty-five years we were frightened of the military and the new regime with President Suharto. But I think it was the regime and the military, not the Indonesian people.

“So many people from East Timor studied in Indonesia so we don’t look at them like our enemy, but as our friends.”

East Timor is now a young country with young leaders. Their understanding of the past is crucial to the future.

“I feel that sharing our  experience is very important because we have experience in the community, not theory. We talk about how we can solve and how we can forgive each other so we can move to the future.”