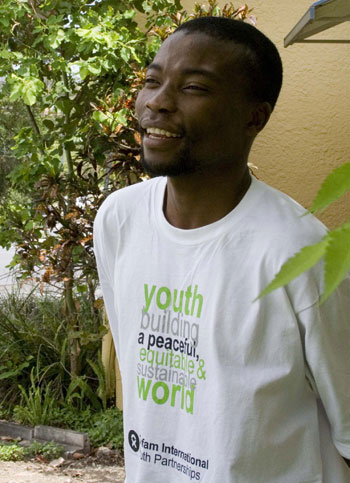 Rassel Chisango is not your average 25-year-old.  He is the Chief Projects Officer and one of the founders of a Zimbabwean not-for-profit organisation the Royal Youth Organisation (RYO) which provides projects that aim to empower the youth of Zimbabwe to meaningfully participate in critical development issues including the Millennium Development Goals.

He is also a star of the most popular soap opera in Zimbabwe.

In Australia in November for a study tour (assisted by Oxfam International and the International Young Professionals Organisation), Mr Chisango visited many different organisations, including the Uniting Church Queensland Synod, to discuss possible future partnerships.

While still at high school, Mr Chisango knew he wanted to empower other young people to take charge of the future of Zimbabwe. He said his Christian faith was one of the driving forces behind his desire for change.
“In the Christian faith we talk about having a calling. To me it was a step towards meeting my destiny,” he said.

“In the current Zimbabwe situation I find that my Christianity becomes more like inspiration. It gives me strength, it gives me hope, it provides the basis for a vision of a better tomorrow and that gives me energy to continue the work that I do.

RYO is a Christian organisation, but Mr Chisango said it is a service provider for all.  “It is the organisation’s inspiration that is Christian faith based, but what we do is development work on the ground and responding to people’s needs, prioritising youth and trying to promote and establish a best practice of youth led development.  We are interdenominational.  We work with young people with all sorts of backgrounds, whether they have a faith or not.”

The current focus for the RYO is the HIV / AIDS crisis.

Mr Chisango believes controlling the spread of HIV and AIDS is the key to youth development in Zimbabwe.  “We are focusing on HIV and AIDS because it is the most pressing developmental challenge of our time.  Nobody is interested in hearing about HIV and AIDS so you try and package it in such a way that it is appealing.”

As an actor, Mr Chisango uses his status as a television personality to educate young people on HIV and AIDS prevention.

“I basically try to use that as an opportunity… for the benefit of the organisation because that is my first and foremost priority.  We realised that we needed to change the means through which we are communicating and interacting with these youth, especially urban youth.

“What we are implementing now is called the Royal Youth Sport Arts Livelihood and Training program (RYSALT) for HIV mitigation and prevention which on a broader scale is also a youth empowerment for development program which we can implement whether there is HIV or not.”

The RYSALT program uses the music and film industries to reach young people and has recently opened a Soccer Academy in Harare.

“Our vision is to groom, mould and build a God fearing and vigilant youth who can audaciously and effectively deal with the challenges and demands of everyday life so as to ensure individual, group and national development.”

Despite 85% of the population of Zimbabwe subscribing to Christianity, the churches initially did not approach the subject of HIV and AIDS.

“The church is usually the one that takes the lead whenever we have a crisis, such as the HIV / AIDS crisis.  When it came to HIV / AIDS it was really a totally different response. They kind of stood aloof; the church disassociated itself from the problem.  The church kind of felt immune to HIV and felt like it was a too secular issue for them to be associated with.

“So we realised, as a youth organisation, the church can be a very firm foundation for a massive campaign that will really see a meaningful contribution to the eventual halting of the spread of HIV and AIDS.

“Since the turn of the millennium… you are really seeing the church getting involved. “We still have some headway to make, you still find some people still resisting, quite influential leaders.  I think eventually, the church as the church, and we are part of that church organisation, we will get there.”

Mr Chisango has seemingly simple dreams for the future of young people in Zimbabwe, but when dreamed up in the current political climate these dreams are huge, and if they succeed, will make a massive difference to the future of the country as a whole.

“I look forward to a future whereby we have universal access to both primary and secondary education. I believe education is the key to any sustainable development.  A future whereby Zimbabwean youth are recognised as key and effective development partners within their local communities.  And a future where youth have the capacity to be able to determine their future and influence critical decisions that have a bearing on their future.”

With people as determined as Rassel Chisango, you just might think they will pull it off.