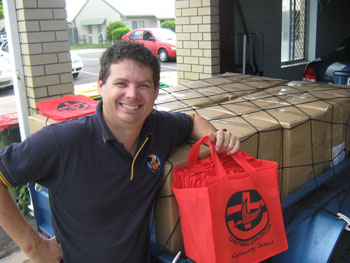 WHAT STARTED as a pipe dream at a craft market meeting has turned into a nationwide venture for the members of the Burdekin Uniting Church in North Queensland.

The Burdekin congregation wanted to give away reusable shopping bags with the Uniting Church logo on them to patrons
of their annual Craft Spectacular, which attracts around 1000 people.

Buying 1000 bags by themselves was uneconomical, but after spreading the word, churches throughout the country jumped on board and a total of 7000 bags were made and distributed just before Christmas.

Burdekin minister Rev Paul Clark said he was excited to see the Uniting Church logo at supermarkets around the country.

“I liked the idea on both a mission and an environmental front,” said Mr Clark.

“We’re going to have 7000 bags across Australia showing and telling the good news; 1500 in our community alone.

“The bags also make a statement on the environment front,” he said.

“I can’t wait to see them in our local supermarkets! ”

2011 has started with a bang too for Mr Clark after he was awarded Citizen of the Year for the Burdekin Shire on Australia Day.

The Burdekin congregation secretly nominated their minister, who was apparently (briefly) speechless after his win.