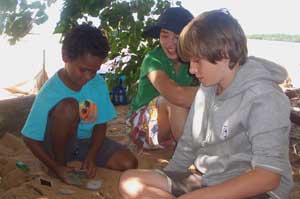 “I learned that Aboriginal people aren’t very different from us,” he said.

“While they may have some traditional music and dance they also do a lot of stuff like us.”

Sherwood Uniting Youth Worker Andrea Robertson said her congregation was in the process of sharing, piece by piece, with the Mapoon congregation as they embark on their bridge-building exercise with an Indigenous community.

She described the program as an invitation only, discipleship-forming, faith-sharing experience.

“We participated in regular Bible studies, wrote belief statements before we went, discussed them and revised them before we came home.

Grace (13) said she is now highly conscious of others and their different skills which she could not have learned in Brisbane.

“This experience has changed some of my attitudes such as now when I look at the sea I don’t see water but water teeming with life.

“When I look at the bush I see food, and when I think of an Aboriginal community I don’t think drugs, alcohol and sexual abuse but of the beautiful children I met in Mapoon.”

Ms Robertson said the image of church on the verandah of the Health Clinic at Mapoon intrudes on her life back home.

“We experienced culture, faith and friendship.

“We learnt that church is about people, not buildings, and that as the creation is vast and beautiful – so must the creator be.”

Andreas (14) said the biggest surprise was the feeling of a community where everyone seemed to know each other and look out for one another.

“This trip has changed the way in which I look at Aboriginal communities and indeed my own community.

“I dream that we may be able to get the same feeling of community here as I felt about community in Mapoon.”

Ms Robertson said her congregation anticipated hosting a group that would be coming south to participate in the Youth and Children’s Ministry Unit Summer Madness camp.

Plans are also in the pipeline for further visits, perhaps next time involving families.

“We hope that we might engage with more of the community each time we visit.”