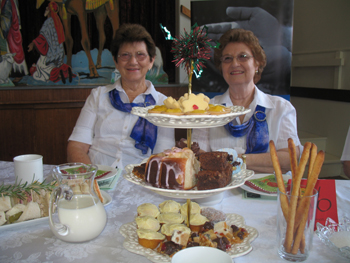 CLAYFIELD UNITING Church, in Brisbane’s inner-north, raised over $4000 for DRUG ARM (Drug Awareness, Rehabilitation and Management) last year through a series of events.

The congregation has supported the work of DRUG ARM over the past few years.

DRUG ARM is a not-forprofit organisation founded on Christian values and principles, committed to reducing harms
associated with alcohol and other drug use.

Clayfield Uniting Church congregation members hosted fundraising events including meals in people’s homes and a board games afternoon but the highlight was a morning tea before Christmas which raised around $3000.

The morning tea was attended by over 100 people from the Clayfield community.

Minister Rev Peter Lockhart said, “In raising awareness and funds the congregation prayed for healing and wholeness to come into the lives of those aff ected by addiction.”

Jane Thompson, DRUG ARM Fundraising and Marketing manager, spoke at the morning tea about the work of DRUG
ARM and how the funds would be used to reach out to those most in need.

Music at the morning tea was provided by Harmoniques from the Gap Uniting Church and the event concluded with some
shared carol singing.

“We continue to pray for people affected by drug addictions and for those who work in this area,” said Mr Lockhart.