Town of Esk in shock after flood 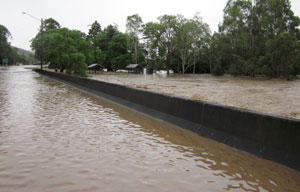 After consistent rain for some months, and five inches that morning, the town of Esk, north of Wivenhoe Dam in the Brisbane Valley, was inundated with water at around 2pm on Monday 10 January.

Sandy and Redbank Creeks broke their banks ripping up trees as they converged and tore through the railway bridge, sweeping vehicles into the street before flooding the centre of town. The old railway bridge, which stood for a hundred years, now hangs forlornly over the muddy water.

A number of people were rapidly evacuated as the torrent raced through the Esk Caravan Park and down Russell Street. One local couple clung to a picnic table before they were winched to safety. Three members of the Esk Uniting Church congregation also had miraculous escapes.

Graham Rutherford escaped through a window as the creek came rushing through his unit. He barely made it to higher ground as the force of the water held him back. “Within moments the water was waist high,” said Mr Rutherford.

Lay Preacher Helen Winter was rescued by her husband George, one of the Church’s elders. They were pinned to the fence of the Esk Motel as the water swept up against them. They raced over the Sandy Creek bridge with seconds to spare before it went under.

As expected the town’s people of Esk have rallied together with working bees to clean up. Blue Care was the central point for donated goods and helped to meet the needs of the reeling community.

On the Sunday after the flood many people at Church were still stunned that such a thing could happen in Esk, which is north of Wivenhoe Dam, but as one member said: “We got off lightly compared to so many.”

Photo : Brough Bridge, in Esk, after it was used as an escape route for some people. Photo by George Winter