Christians to campaign for action on global poverty 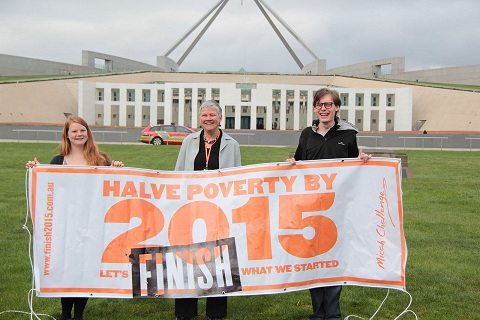 In the lead up to the federal election on 14 September, the Micah Challenge coalition has launched a national campaign to accelerate Australia's contribution to halving world poverty by 2015.

Finish the Race will mobilise Christian churches, organisations and individuals across the country in a united appeal to Australian politicians to prioritise the commitment to the UN Millennium Development Goals (MDGs) – a set of eight international targets intended to halve poverty by 2015.

During the six-month pre-election campaign, Micah Challenge supporters will call on politicians to increase Australia's aid budget to 0.7 per cent of Gross National Income by the year 2020.

Micah Challenge is a global movement of Christians speaking out against poverty and injustice. In Australia, the Finish the Race campaign is endorsed by more than 50 aid and development agencies, as well as mainstream churches.

"Our vision is to give every Christian in this country the opportunity to add their voice to our collective call for justice," says Micah Challenge National Coordinator John Beckett.

"We hope to see hundreds of churches and individuals taking local action between April and July 2013 that will lead to positive and constructive global change."

The conditions for campaigning this year are uniquely conducive for change, he adds.

"Elections are foundation-building times for political parties, and with the last federal election before the MDG deadline in sight, we have a significant opportunity to influence our major parties' policies and ensure the goal of halving global poverty by 2015 doesn't slip down our nation's priority list."

Photo : Church representatives on the front lawn of Parliament House in Canberra at the Voices for Justice lobbying event in 2012. Photo: Micah Challenge