Home > National News > Making music for the next generation

Making music for the next generation 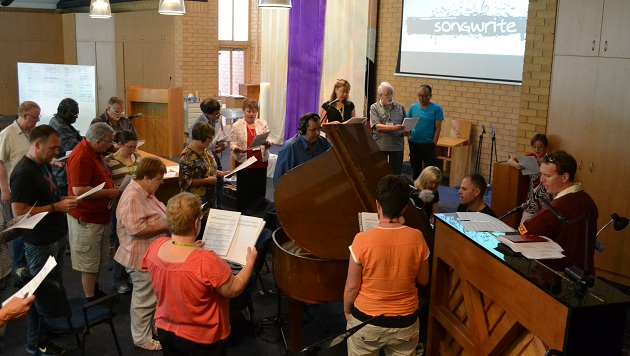 Journey reports on songwrite, the first national gathering of worship songwriters in the life of the Uniting Church.

Thirty songwriters, musicians, mentors and coaches from across Australia came together for songwrite at Kippax Uniting Church, Canberra over the weekend of 15 – 17 February.

They gathered to talk about and compose new songs for both traditional and contemporary contexts, and to be inspired and challenged about the role of music in communities of faith.

Coordinators for the weekend were Sharon Kirk, The Downs Presbytery minister and Rev David MacGregor from Oxley-Darra Uniting Church in Brisbane.

Both are members of the Queensland Synod based Assembly Worship Working Group which hosted the weekend.

David MacGregor believes that songwrite reflects the need to not only encourage Uniting Church song writers, but to inspire a broader theological content and a wider range of musical styles.

"Uniting Churches are good at using songs of praise in their worship, but too easily forget the place of song in helping address the need for lament, confession and intercession," he says.

Many of those who attended the workshop had rarely written or shared a worship song before, he adds, "yet inspired by the Spirit, and through a supportive creative community, new worship songs were birthed" over the course of the weekend workshop.

Music scores and recordings were created, many performed at the "open mic" evening.

The empowering and prophetic role of songs of worship, within and from communities of faith, was a strong emphasis over the weekend.

"There's a keenness to explore how songwrite participants and other songwriters across the land can be supported and encouraged," says Mr MacGregor, "how the new song of First Peoples and migrant-ethnic communities can be harnessed, and how ultimately the triune God can be worshipped and served in fresh ways.

"For the participants, the opportunity to work collaboratively and to network with other musicians was encouraging and life-giving, he adds.

For Uniting Church musicians, songwrite is just the first note.

David MacGregor is a well-known songwriter whose music is featured in publications including Uniting in Worship 2, Together in Song and Seasons of the Spirit.