An Evening with John Shelby Spong 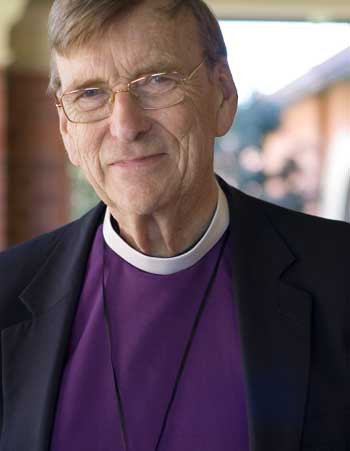 I CAME away wondering not about the speaker but about his audience.

My first impressions of the evening were based upon the gathering crowd.

Anyone expecting a motley collection of ratbag heretics and weirdo new-agists would have been sorely disappointed.

Of course there were exceptions – I even spotted a young person – but the whole show was so very “Uniting Church” in appearance.

Judging from the crowd alone, one might have imagined a large respectable Sunday morning congregation, or even a freshly convened Synod.

Where were all the extremists?

Spong imagined himself to be addressing “the church alumni association”, by which he means those who have grown weary of swimming against the tide of fundamentalism and who have left the church, even if they have not lost their faith.

And he was probably correct, at least in part.

I’m sure there were some, perhaps many, who fall into that category, but I know (because I recognised them) that there were lots and lots of folk in the hall who are not “alumni”.

They have not graduated from the institution but remain firmly embedded within it, many of them in positions of considerable responsibility.

As folk arrived, there were lots of moments of recognition, many of them of the “I didn’t expect you to be here!” kind.

So what does the presence of so many solid church goers tell us?

The bishop, dressed as a church insider (purple stock and clerical collar), covered a wide range of subjects and the vast majority of the crowd followed him every step of the way.

When he waxed eloquent on matters of sexuality, people listened intently and nodded in agreement.

But that was to be expected. What was more surprising to me was the strength of response he received when he spoke about the struggle for women to claim a legitimate place in the life of the church.

There were spontaneous applause and cries of encouragement, not just from the women in the crowd even though their voices were most prominent.

Do their reactions question our assumptions about equality in the church?

At other points, too, there was a palpable sense of connectedness between speaker and spoken to – people leaning forward in their seats, head nodding (or wagging, as appropriate), an immediate responsiveness to his commentary on the place of the church in society discerned in body language and note taking and whispered asides to neighbours.

Afterwards, in the general hubbub that follows such gatherings, it was easy to feel a collective sense of relief: I’m not alone. I’m not the only one who thinks such things.

Perhaps it is okay to ask questions which challenge conventional and conservative thinking.

What I think we can conclude from observations of the crowd is that there are many faithful, devoted Christians who want more from their relationship with the God of the Bible than the easy answers they are sometimes served up in church.

And I think they deserve the respect of the whole church to be allowed to wrestle with what the Good Shepherd means when he says, “I came that they may have life, and have it abundantly”.

APART FROM a few inferences, which pointed at some of those heresies for which Spong is regularly attacked, I heard little that was too controversial or heterodox.

Spong was an engaging speaker, his anecdotes, humour and obvious depth of reading provided the audience with both insight and entertainment.

This does not mean I agreed with all he had to say but it helped me understand his popularity.

It was clear that whilst Spong wanted to deconstruct literalism he still accorded the Bible great authority and treated it with respect. If not why would he spend so much time analysing it?

When asked a question about his personal understanding of God he gave a thoroughly post modern answer.

He said his understanding of God and of Jesus was based on his personal experiences.

In some ways none of us as Christians can say any more or less than that our understanding of God is based on our personal experience of God.

The limitation of this is that we can fall into the trap of thinking ‘my’ experience is right whilst other people’s are wrong.

Finding the balance requires us to understand that our faith exists in the context of a community and that we need to weigh up our experiences in the light of what others have experienced and what the community of faith has agreed upon together.

As the evening came to a close Spong revealed his commitment to the Scripture as the source of his faith as he declared that his approach was very much grounded in his conviction concerning Jesus teaching found in John 10:10 “I came that they might have life and have it abundantly.”

He then wrapped up by declaring his faith as a follower of Jesus.

In my encounters with Christians from all walks of life and from the vast spectrum of theological understanding I might want to argue that some of what Bishop Spong says is wrong.

Yet I would do so acknowledging that on this particular night he showed a certain respect for the authority of scripture, if in a different way to me, he grounded his faith in this scripture and his personal experiences of Jesus, and that he willingly and publicly declared himself to be a follower of Jesus.

I CAME away with a deep sense of disappointment.

Bishop Spong’s critique of the consequences of literalist approaches to scripture and fundamentalist faith, which have led to injustice, violence and exclusion, was neither new nor very constructive.

I waited to hear a new approach to the scriptures and faith that might help those who have only been exposed to such poor teaching in the past.

I waited in vain.

My greater disappointment stemmed from Bishop Spong’s repeated assertion that those who held such narrow, out dated views were “mentally ill”, “mentally disturbed” or “mentally unbalanced”.

While such comments drew laughter from the adoring audience, it seems to me that this is simply a more modern way of branding people as heretics or being possessed of evil spirits; something Bishop Spong derides.

As a proponent of the enlightenment scientific world view, I would have thought that Bishop Spong would be more understanding of the serious stigma and misunderstanding experienced by those with mental illness and would not add to the widespread disparagement they encounter by dismissing those with whom he disagreed in such language.

However these comments alerted me to something I was told many years ago.

Fundamentalism is not a theological position, rather a mindset that is convinced that the way I understand truth is “right” and any opposing views are clearly foolish, misguided or blatantly wrong.

I will stand with anyone who would confront the injustice, violence and exclusion that is often perpetrated in the name of Christ.

However I will not use the same tactics that categorize and disparage those who hold different views.

Given Bishop Spong’s obvious popularity I can only assume he does offer a positive, life-affirming approach to life in Christ, but I was disappointed that I didn’t hear it.