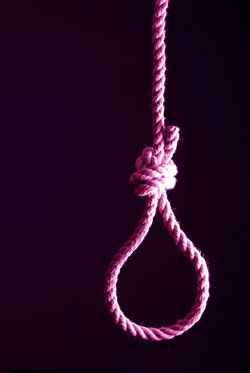 On 2 December 2005 a bell tolled 25 times in Melbourne while a young man was hanged in Singapore’s Changi Prison. He was a convicted drug trafficker, caught carrying 400g of heroin. The pictures on the television were heart wrenching: a mother embracing her son following his brother’s execution.

Capital punishment has been the subject of much debate over many years. The Van Nguyen case has again brought this issue to the forefront of public debate. So, how should Christians approach capital punishment?

Think back 2000 years. Jesus was sitting in the temple teaching and while he was there, a woman was brought to him by the Pharisees. He was told she had been caught in the very act of adultery and was reminded of the Mosaic Law that the penalty for adultery is stoning. The Pharisees ask, “Now what do you say?”

The question resonates for us. What do we say about capital punishment in a world dominated by talkback kings declaring, ‘An eye for an eye’? The Mosaic Law prescribes the death penalty for some 37 offences including being a wizard yet we would not advocate death to all magicians. Therefore the Law of Moses is not helpful to a Christian understanding of capital punishment.

Jesus explicitly calls us beyond an eye for an eye when he says, “But I say to you, do not resist an evildoer.”

Some Christians have claimed that Jesus was saying Christians shouldn’t impose the death penalty, but that the state needs capital punishment in order to maintain good order. This approach comes to the heart of our understanding of what sentencing is about.

Sentencing has widely been seen as having four roles: punishment, deterrence, protection, and rehabilitation.

Punishment has always been an argument for the death penalty. This has often been motivated (although rarely stated) by revenge. Leviticus 19:17 says “you shall not take vengeance…against any of your people, but you shall love your neighbour as yourself” – a command which Jesus reiterates in “The Golden Rule”.

Many have argued the only way to properly punish murder is to take life, but arguments like these led to torture. All human forms of punishment are flawed and inadequate, therefore ultimately the responsibility lies with God.

Deterrence has also been cited as a reason for capital punishment. It has been described as the “ultimate” deterrent yet the statistics do not bear that out. In fact the Bible reminds us that from Adam and Eve onwards people have rarely considered the consequences of their actions.

Protection of innocent people is also cited as grounds for capital punishment. The death penalty does provide protection for the community from one individual. It does not protect the innocent who have been sentenced to death. Life imprisonment protects those who are wrongly convicted.

Finally, rehabilitation is not the goal of capital punishment. Some transformation may occur in a person who is on death row but it is certainly not the aim.

So, what did Jesus say? He said, “Whoever is without sin cast the first stone.” He challenged the Pharisees to condemn the woman, and they all walked away. Jesus was left alone standing with the woman. He asked if anyone had condemned her, no one had and he concluded “Neither do I condemn you. Go your way, and from now on do not sin again.”

Jesus sees the chance for rehabilitation and redemption of all. No one is beyond God’s love.
As Christians we should be asking how we deal with those whom society believes are beyond saving. We need to be a prophetic voice to the community about the values of Christ. Our approach to capital punishment demonstrates Christ to the world.

Andrew Johnson is a member of Broadwater Road Uniting Church and serves as a Social Responsibility Advocate in the Queensland Synod.