Home > Opinion > Face to face in Afghanistan; Building bridges between Christians and Muslims

Face to face in Afghanistan; Building bridges between Christians and Muslims 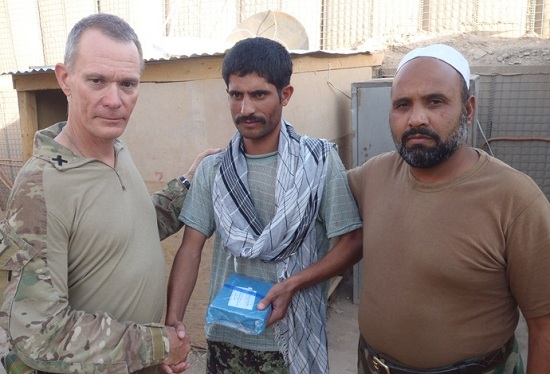 Uniting Church Army chaplain John Saunders was out jogging at Al Minhad Air Base in the United Arab Emirates (UAE), en route to Afghanistan, when he heard an imam singing the call to prayer.

The sun had not yet come up over the desert horizon when I heard the call. It was then that a plan dropped into my head to open dialogue with Muslim leaders in Afghanistan.

I wanted to demonstrate that Australians respected their beliefs and were prepared to support them in their efforts at nation-building.

In doing so, I hoped to save lives — Aussie and Afghan.

I decided to start by presenting local Muslim leaders with copies of the Qur'an as gifts from the Australian Muslim community.

During my training as a Minister of the Word I had visited a Brisbane mosque, so it was a simple step to request copies with greetings from Australian Muslims attached. Despite their initial reservations, my commanders agreed.

I began distributing the Qur'an and started a dialogue with village mullahs and the Afghan National Army religious officers and mullahs.

To be honest, I was amazed at the response.

I was welcomed with open arms and extended the hand of friendship and the kiss of greeting.

I became known as the "Australian mullah", and when I arrived at a forward operating base to visit my soldiers the Afghans would come looking for me to sit and have chai (tea) and to talk about faith and belief.

At one stage, I sat talking with about six mullahs, all asking questions, and tried to dispel myths about the Christian faith.

After a while one mullah looked at me, thought about what I had explained, and responded, "Yes, I understand. This too is in the Holy Qur'an."

They were hungry to know what we Christians actually believed, and at one stage, even asked to come into our base chapel and have me explain our prayer and worship.

I learnt a great deal as well, and was surprised at what we share in common.

I am still challenged by their devotion and life of prayer.

Did it help end the bloodshed?

No, I can't say I saw a great deal of immediate success; we lost four of our blokes, and the fight goes on.

Did we begin to understand each other, and did the walls of ignorance and hatred begin to come down? Yes!

Did it open doors which otherwise might have stayed closed? Yes!

Being able to engage on a religious level smoothed the process of relationship-building for the taskforce.

The experience has taught me to be open to discussing faith and belief with Muslims and to understand the Abrahamic heritage we share.

Dialogue with people of other faiths is a worthwhile activity for Christians — even a Uniting Church Army chaplain in the middle of Afghanistan.