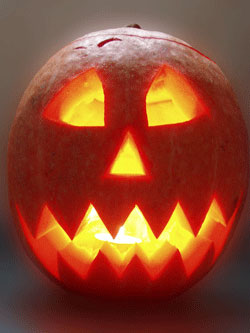 All right, I admit it. I hate Halloween and all the garbage that goes with it.

Each 31 October I put a sign on our front door that says “No Tricks and No Treats”. I don’t have to buy any lollies but I do have to wash the smashed egg off the front of the house next morning.

Not only do I see Halloween as a sign of US cultural imperialism run riot through our otherwise quiet and ordered neighbourhood, but it ends up looking like a merchandising convention from the other side of hell.

Many Christian traditions designate particular feast days for the various saints, the main one traditionally being All Saints Day also known as “All Hallows”.

It was instituted to honour all the saints both known and unknown and to make up for any deficiencies in the other celebrations of saints’ feasts throughout the year.

Thanks to a decision of Pope Gregory IV (827-844) for western Christians this falls on 1 November while the Eastern Orthodox Church follows the earlier tradition of celebrating the feast on the first Sunday after Pentecost which marks the close of the Easter season.

Like many Christian celebrations All Hallows was originally a day of religious festivities in northern European pagan traditions, until it was appropriated by Christian missionaries and the hope of the Gospel became integral to the celebrations.

By contrast, the customs of Halloween are about fear. It was a Celtic belief that evil spirits roamed the earth on the last night of the Celtic year (October 31) and got up to mischief. Part of that belief was that people could survive the night safely by dressing up as ghosts or witches or by bribing the evil spirits with treats.

Now the bed-sheets and pumpkins are long gone and the masks and outfits are sold in K-Mart.

Commercialism has overtaken the panhandling and mild vandalism is retribution for non-participation.

Like Christmas and Easter, All Saints Day has been lost in secularisation, commercialism and consumerism and is beyond recognition.

While the two big festivals maintain enough of the faith story to warrant perseverance by the Church, All Hallows is a lost cause.

Let’s dump it fast and look for an alternative way to celebrate that great communion of saints to which Christ has given us membership.