Home > Opinion > Is this our Australia?

Is this our Australia? 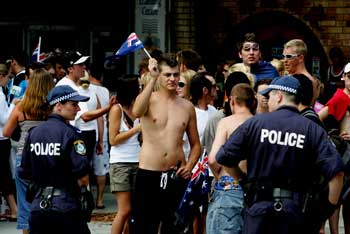 IN LATE 1847, Karl Marx and his fellow communitarians were accused by some of the bourgeois elite of undermining the most fundamental of social institutions – private property and the family.

His response was characteristically scathing, and ingenious:

“You are horrified at our intending to do away with private property. But in your existing society, private property is already done away with for nine tenths of the population … Abolition of the family! On what foundation is the present family, the bourgeois family based? On capital, on private gain.”

The uneven distribution inherent to capitalism, Marx claimed, had already corrupted these older forms of social life, reducing them to parodies of their former selves.

He thus dismissed the accusation as entirely bogus, akin to being charged with the murder of someone who is already dead.

I am reminded of Marx’s words often these days, especially when I hear claims that unintegrated ethnic groups are eroding Australian identity.

We are then told that the answer is a return to traditional “Australian values” as the rite of passage to full participation in the benefits and privileges of civil society.

But the truth of our situation is that the unenlightened self-interest and moral decadence that have sustained this country’s much touted economic growth have already hollowed out Australian identity.

The mantra-like use of the terms “Australian” or “un-Australian” are thus little more than empty nostalgia, hearkening back to a time when such terms actually meant something.

The clearest indication of the loss of our national identity has been the changes in foreign policy and immigration under Paul Keating and John Howard.

For Keating, the willingness to engage with the life and economy of the Asia-Pacific was an expression of the strength of Australian identity – which he saw as sustained by national remorse for past crimes, prodded by a government unafraid of moral leadership, codified in an Australian Republic, and nourished by the depth of artistic imagination.

Such an Australia, said Keating, has nothing to fear from the prospect of Asian immigration because our internal fortitude could withstand the tide, and the sheer attractiveness of our generous way of life couldn’t be resisted for long.

Of course, his robust vision had to distinguish between the ‘real’ Australia – whose racist feeling and addiction to sport inspired nothing but disdain from Keating – and that grander reality which could be modelled, aspired to, achieved in our time.

The greatest threat to progress is for the people to fall out of step with the government, and not the other way around.

Keating recognised, better than any other politician, that in order to achieve our nation, it is necessary, as Bertolt Brecht put it, “to dissolve a people and elect another.”

In contrast, Howard’s “relaxed and comfortable” approach to national life was not simply a rejection of Keating’s aggressive, deliberate reforms. It represented a vile affirmation of our basest tendencies.

And while there was little room for sport in Keating’s Australia-to-come, Howard’s immigration policy seems modelled after his sports obsession: it is a chest-beating, green-and-gold type of national pride that is most keenly felt when staring down a formidable foe.

In a manner every bit as shameless and recalcitrant as Hewson’s opposition to Mabo, Howard’s persistent appeal to this country’s latent racism has re-energized the role of fear in the national psyche – fear that our prized possessions might be taken from us by some foreign intruder, that we ourselves might be dispossessed of our cultural birthright.

There was thus something terrifyingly accurate in the comments of one of the participants in the Cronulla riots of 11 December 2005:

“It was better than Australia Day … I had the best time of my life. Not because we were there fighting Lebos, but just the atmosphere, you know. Everyone has had enough of them.”

Isn’t this what “Australia” has come to mean after eleven long years under Howard?

Beneath the thin veneer of our hackneyed national myths, it stands for the conversion of our love for sporting rivalry into populist hostility against foreigners, whether on the beaches of Cronulla, or in the form of anti-immigration sentiment expressed by recent immigrants, wanting, as it were, to close the door behind them.

The fault is not with the government. It is with us.

We have valued the promise of bulging back-pockets and strong national borders over the possibility of a different kind of Australia.

And we have succumbed to the fear of uncertainty rather than embracing the promise of a just society.

I wrote last month that the Uniting Church has become more symptomatic of our culture than it has been truly prophetic.

Our churches continue to reflect so much of the same selfishness, racism and fear of intruders that we see all around us.

It is high-time that we had the courage to embody God’s “No!” to our godless culture, so that we can also proclaim the “Yes!” of the new creation in Jesus Christ.

Scott Stephens is an author, theologian and minister at Chermside Kedron Uniting Church and teaches ethics at Trinity Theological College.