Journey asks Elizabeth Law of her experience of racial prejudice 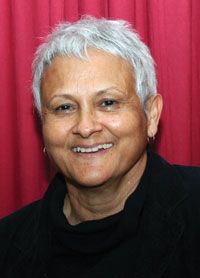 As an Aboriginal child growing up in Western Queensland we were never taught what racism was but I remember occasions. When I was 9 or 10 some of the kids in our school used to call us names and I would get angry and chase them.

I didn’t know what was happening except that it was offensive because we didn’t have a name for it but, as the old saying goes, “sticks and stone can break your bones” and it does hurt. It’s an extremely painful experience and you carry the scars right throughout your life.

As a teenager I can remember being separated from the white people in the local picture theatre and not being allowed to sit with a white friend. There were certain shops you didn’t feel you could go into and Aboriginal people were only accepted in some parts of the local hotel.

There was and still is a great divide between indigenous and non indigenous people in terms of housing, health, employment and education.

Between the 1970s and 1980s when I was the first Aboriginal person to be employed in a local school as a teacher’s aide I was told parents didn’t want their kids coming to a school where there were Aboriginal children and staff.

Even up to that time Aboriginal people in my community were living in substandard dwellings on the fringes of town and when our local Aboriginal Housing Co-op was formed it faced racial opposition.

It is when you experience racial prejudice in the church that you have the most awful feeling; when you hear comments from people and your ministry is not accepted because you are an Aboriginal person.

You feel like you’re at the end of the branch and that kind of isolation drives you back into your own community.

I didn’t come from a church background as a child, but as an adult Christian the scripture that brings me courage and hope is John 15 where Jesus said, “I am the vine and you are the branches”. That encourages me to feel connected to Christ and I also draw courage from John 14 where Jesus promised that he will prepare a place for us.

Racism is still very much alive and well but I think people who have never experienced racism are not as alert to the comments as those who have experienced racism.
When I hear other Australians making racist remarks about our own indigenous people as well as refugees who have joined us from other countries I still find myself in shock.

Elizabeth Law is a member of the Zillmere Congregation.