Journey Asks June Ehrenberg: How has road trauma impacted on your faith journey? 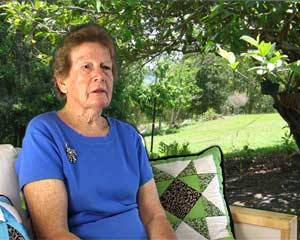 A peaceful stretch of the Bruce Highway just to the north of Yandina was shattered on the evening of 7 December 1978 when eight people lost their lives in a tragic multi-vehicle accident. June Ehrenberg is a mother who’s life was changed forever as a result of the accident.

Our daughter Annette was going to see the film Jesus of Nazareth. We weren’t religious and my husband wasn’t very happy about her going to see this film.

I thought surely if there is a God he wouldn’t let anything happen to an 11-year-old girl going to see a film about Jesus. And besides, it was so hard to say no to Irene who was taking her.

We went down to the corner to meet Irene and she was late and I got a bit angry about that and I would have come home but another lady came along and talked.

We were there when Irene came and they carefully buckled Annette into the car and they were off.

I woke up the next morning at 1am and saw the light was still on so I woke my husband and said we’d better go looking for them.

We started off towards Nambour and came to the turnoff leading to the Bruce Highway and saw there had been an accident.

There were police cars, fire brigade and ambulances all there.

We went over to the policeman and described our daughter and he said the bodies had been taken to the morgue.

The attendant at the hospital showed us Annette’s body and we identified it.

We arranged a funeral. We didn’t want anything in a church because we hadn’t been to church before and we didn’t want to be hypocrites.

The minister interviewed us in his study and he kept on quoting from the Bible and I was getting really angry because our daughter was dead and what good was that going to do?

Little did I expect that it wouldn’t be long before I would have walked barefoot over broken glass to hear what that man had to say about God.

I had an old Bible I’d been given when I was about ten so I started reading it at Genesis because I didn’t know any different.

That’s where you usually start a book – at the beginning.

I must have got into the New Testament and I remember one night kneeling beside the bed and saying, “I believe”.

I dreamed that I was sitting at the kitchen table and Annette was standing there and she said, “Why are you so sad?” And I said, “Because you’re dead”.

When I woke up I knew there was a God, she is with him and she is not dead. Spirituality she is alive.

June and Rod Ehrenberg found fellowship and support in the Nambour Uniting Church where, all these years later, they continue to worship and serve God. June shares her story with the prayer that others may find strength on God for their own journey. Their story is told on the DVD Faith Journeys produced by Amity Care Inc (Productions) part of the ministry of Nambour Uniting Church. To purchase copies of the DVD or details of other worship resources please contact Greg Ross on 07 5441 1135 or click here to email