Home > Opinion > Journey asks Kaye Ronalds… What has been your experience in leadership in the Uniting Church?

Journey asks Kaye Ronalds… What has been your experience in leadership in the Uniting Church? 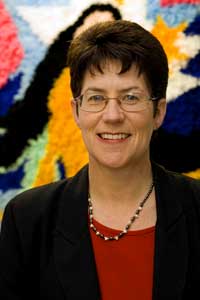 I was born in 1960 into a family of four girls. I think the first feminist in our family was my father.

He had watched his mother struggle to provide for her sons when widowed in the late 1930s.

He knew first hand that if women got equal pay for equal work then the “widows and the fatherless” would not be so vulnerable.

Our parents inspired us to believe that we could achieve ‘anything that we put our minds to’ and to get a qualification that we could fall back on in case we ever had to be the breadwinner in the family .

In 1970s when Rev Norma Spear went on the TV show called I’ve Got a Secret no one guessed her secret that she was the first woman in the Methodist Church in Queensland ordained as a Minister of the Word.

At that time femaleness and ordained ministry were not something one expected to come in the same package.

Norma was my minister and a role model for me. She helped me identify my own call.

In the early years of the Uniting Church there was a campaign of affirmative action to ensure that one third of the positions on the Councils of the Church were occupied by women.

As a young woman I was often appointed to committees and councils gaining valuable experience and confidence.

In my first appointment I followed Rev Elizabeth McChesney-Clark so the congregations had already formed the opinion that female ministers could be capable, discerning and diligent leaders.

Norma and Elizabeth were the trailblazers who made it easy for my generation to take our place in ministry in the Uniting Church.

Sometimes in ecumenical settings I would be challenged by someone (often women) who wanted me to explain how I dealt with Scripture passages like 1 Timothy 3 and 1 Corinthians 14: 33, 34. I think they were always more convinced by my work than my words.

The only place in which I have been a trailblazer has been when I was invited to become an Army Chaplain. In Western Australia, Wendy Snook had become the first female RAAF chaplain in Australia and I had the honour of being the first female Army chaplain.

At first I was a bit of a curiosity but nowadays most people just accept that if my church thinks I can do the task then they are prepared to give me a fair go.

A network of women in ministry was intentionally developed in the late 1980s and it still meets to give support to female ministry candidates.

I have been fortunate to have a husband and two daughters who are supportive of the roles I have filled in ministry. Owen has done much of the home making which has enabled me to be away from home with Army Chaplaincy and now with Presbytery Ministry.

My experience is that leadership is more about influence than power.

Being a minister of the word has given me the privilege of influencing the lives of many people in what I hope has been a fruitful and positive way.

The trailblazers of the women’s movement and the many men who have been prepared to share leadership and ministry have given me a chance to invest my gifts in the life of the Uniting Church.

Kaye Ronalds is Presbytery Minister in the Central Queensland Presbytery