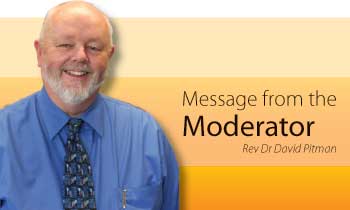 THE GOSPEL records tell us that the encounters the disciples had with the risen Jesus were life-changing experiences.

John, in his Gospel record, describes how the fear that gripped the disciples was transformed into joy, and how the doubt that engulfed Thomas was converted into faith, as Jesus appeared amongst his followers and restored their hope and confidence.

Then, as we know, Jesus went away again. He was no longer with them. There was no more seeing, touching or face-to-face conversation!

The potential for post-Easter depression was very real.

They might have been excused for asking, “Is there life after Easter?”

All kinds of preposterous ideas have been advanced in relation to the death and resurrection of Jesus. What can’t be denied is the transformation of the disciples from fearful individuals hiding away in locked rooms, to courageous public witnesses, boldly testifying to the living presence and power of Christ!

Inevitably, there is a strong element of mystery in the resurrection of Jesus.

It is not something we can really understand. Rather, it is a reality we experience and therefore believe and celebrate!

So to the question, “Is there life after Easter?”, the response of Christians for 2000 years has been a resounding “Yes!”
The witness of the gospel stories reminds us in a compelling way that the church did not create the idea or message of Easter.

It was out of the experience of Easter that the church was born because the followers of Jesus sensed his continuing presence amongst them and committed themselves to live as he had lived, and to pass on to others what he had taught them.

The church that grew up around that little group of men and women was a new creation. The fact that it survived is a miracle and it’s a miracle that we are here today.

A multitude of forces have threatened to tear the church apart and destroy it on numerous occasions since Jesus appeared to his disciples on that first Easter Day long ago.

The church survived during all that time because Christ breathed his Spirit into it; because it is Christ’s church, not ours; and because the grace of Christ is stronger than any of our human foibles and factionalism!

It has survived because of all those followers of Jesus who have understood that the Christian life is not about power, but pilgrimage; not about being served, but serving others.

It has survived because there have always been enough Christians who have been committed as disciples of Jesus to share the good news of his life, death and resurrection with others.

The resurrection stories in the Gospels contain frequent references to this ministry of witness.

The women at the tomb were told to go and tell the good news that Christ was alive and the risen Jesus commissioned his disciples to go into the world, sharing the good news and baptising those who believe.

John concludes his Gospel record with the statement that everything he has written about Jesus is motivated by his deep desire to give others the opportunity to hear the story and believe for themselves that Jesus is the Son of God and Messiah. (John 20:31)

We live in a society that is fed a constant diet of bad news and it is in this very social context that as followers of Jesus we are called to be bearers of good news and embody the good news in our own lives.

As a good news people we communicate the love and grace of God in both word and action.

We are a resurrection people!
We are a good news people!
Let us live who we are in faith, hope and love.