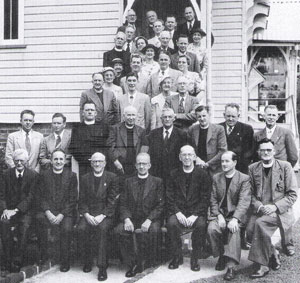 I appreciate all that you and your team do to produce Journey on a monthly basis. It is manifest that there is a high degree of sheer hard work and much inspiration too to achieve and sustain such a high standard.

I am forwarding this message for your information and not with a view to its publication though you are free to deal with its contents as you choose.

I received an enquiry from one of my friends in the Broadwater Road congregation with reference to the photograph of the Synod meeting shown on page 8 of the March publication. She had received a letter from a retired solicitor who had enquired whether I was the person in the top row second from the right as one looks at the photo. I advised that the identification was correct.

The solicitor is Mr. E. L. Lee (Ted) who once worked closely with the late Owen Fletcher of the firm of Morris, Fletcher and Cross. He is the person who prepared the document which was passed by the Legislative Assembly of the Queensland Parliament and proclaimed on 22nd June 1977 as the Act which made provision for the inauguration of The Uniting Church in Australia in this state. It provided for the vesting of all relevant property in the name of The Uniting Church in Australia Property Trust (Q.) I understand that he is in indifferent health. Ted was also the one who greatly helped us when for the Second Synod in 1978 he formulated the resolutions we needed to pass in order to proceed with the incorporation of Moreton Bay College.

The photograph was taken on the last (third) day of the meetings of the South Brisbane District Synod There would have been eight other Synods in session throughout the state at the same time. At that stage the District Synods met in late October at the locations determined by the previous Annual Conference. The Conference was then always held in Brisbane in the humid days of late February and early March. The months for these meetings were revised a few years later.

The membership of the Synod comprised those ministers who were serving in circuits within the Synod boundaries. There were lay representatives from the circuits. The Conference identified the metropolitan Synods with which ministers in departmental roles were to be related. Retired ministers were able to attend the Synod within which they had chosen to reside.

The Conference also determined where the annual Synod meetings would be held. The South Brisbane Synod in 1955 was held in Coolangatta, not Beenleigh as noted under the photograph.

Most of the senior ministers are in clerical garb and dark suits. How times have changed, thankfully.
I can identify quite a number. Those in the front row are Charles Palethorpe(?), J. Albert Pratt, Samuel Monro (Chairman), Joseph Tainton (Secretary), George Pittendrigh, Gordon Moore, and George Phillips. The third from the left in the second row is Ralph Heaton and three along is Jim Mitchell. Harold Larkin is first on the left in the third row. In the row above I can discern Arthur Preston, Ivan Alcorn and Dolores Guyatt. One can see Stanley Potter, second from left, in the top row. The first on the left could be Missionary Herbert Carter who was at Moorooka.

I know from an old diary that the photograph was taken on the Thursday, the last day of the Synod. The Master of King’s College, Rev Hubert Trigge, who had been at the Synod, would have returned to King’s College, then in its first year at St Lucia. It was also that time of the year which was called ‘swot vac’ and it was prudent to have someone in authority on the campus. I was also in the college scene as the Associate Master and resident in the original property at Kangaroo Point which was still the home for many students. The Deputy Master, Ian Grimmett, was on study leave at Union Theological Seminary in New York.

Photo : The South Brisbane Synod meeting in 1955 in Coolangatta 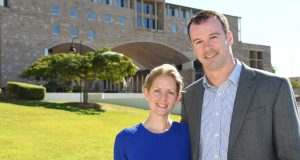 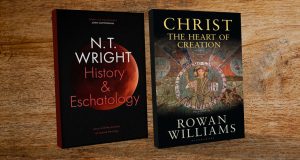 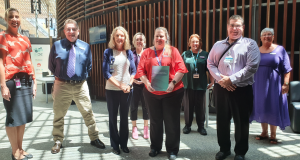