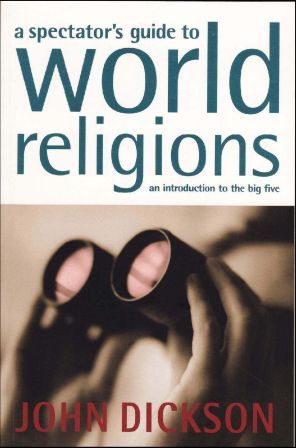 Hinduism , Buddhism , Judaism , Christianity and Islam are compared, in the winning title for the Australian Christian Book Awards. “A spectator’s guide to world religions: an introduction to the big five” by John Dickson (Blue Bottle Books) is the 2005 Australian Christian Book of the Year. Presenting a clear, accessible, and unbiased presentation of the major faiths, the book comprehensively outlines the history and belief systems of Hinduism, Buddhism, Judaism, Christianity and Islam. Each major religion comprises sections on its origins, an overview of its history, surveys its major teachings, identifies its major streams or types, then concludes with a single page summary and a list of helpful and official Websites.

2nd Prize was shared jointly by “Beyond Greed” by Brian Rosner (Matthias Media) and “Exploring Religion in School: a national priority” by Brian Hill (Openbook) Brian Hill presents a cogent educational case for religious education having core status in a general curriculum, and urges a national reassessment of the purposes and politics of religious education in schools. Brian Rosner’s book hits a nerve in all Australians without inducing a guilt trip, as he looks at the driving forces behind the culture affecting our every day choices via school or employment priorities; life-style, health care, housing or transport choices; educational or vocational priorities; or retirement plans and expectations

3rd Prize was awarded to “Love is the Spur” by Geofrey Bingham (Eyrie Books) A powerful evocation life in the WWII Japanese POW camps of Kranji and Changi. The negative effects human depravity, and of the self-interest of some chaplains under pressure is boldly treated, as is the life-giving effect of Christian hope in survival. Geoff Bingham gives an unmistakable Australian Christian voice to a pivotal period of history.