Home > Queensland Synod News > A chance to stretch your thinking

A chance to stretch your thinking 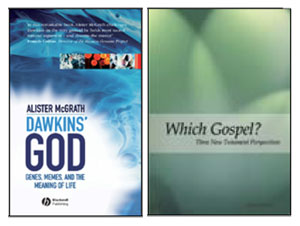 The morning session is an opportunity for dialogue with the President of the Uniting Church , Rev. Dr Dean Drayton. In a recently published book, Which Gospel? Three New Testament Perspectives, Dr Drayton has challenged the church to re-acquaint itself with the New Testament accounts of the gospel.

The book has been described as a wake up call to the churches to reconsider their function as gospel bearers that focus on God rather than themselves. Dr Drayton will expand on these insights and discuss them with a panel of UCA members.

The afternoon session is an opportunity to explore some recent discussions in the encounter between Science and Christianity. Professor Peter Harrison ( Bond University ) and Professor Ross McKenzie ( University of Queensland ) will provide insights into Alister McGrath’s, Dawkins God: Genes Memes and the Meaning of Life.

Peter Harrison and Ross McKenzie will introduce the theological and scientific issues at stake in this debate.

As well as being President of the Uniting Church in (2003-2006) , Dr Drayton is Lecturer in Theology: Mission and Evangelism at the United Theological College in Sydney . Ordained in 1969, he has served as parish minister, Director of the New South Wales Synod’s Board of Mission, and Moderator of the NSW Synod in 1995/96.

Peter Harrison is Professor of History and Philosophy at Bond University . He is widely published in the history of modern thought and his current writing is at the forefront of discussions about the relationship between science and Christianity. His book, The Bible, Protestantism and the Rise of Natural Science (Cambridge , 1998) has been widely acclaimed. He is a founding member of the International Society for Science and Religion.

Ross McKenzie is a Professorial Research Fellow in the Physics Department at the University of Queensland . His research interests focus on using quantum physics to understand complex molecular materials ranging from organic metals to proteins. He often gives seminars at universities and churches on the relationship between science and theology. He is currently the Chairman of the Queensland branch of ISCAST (Institute for the Study of Christianity in an Age of Science and Technology).

For more information contact Trinity Theological College at 07 3377 9950 or email the College HERE.

Photo : Two books worth thinking about