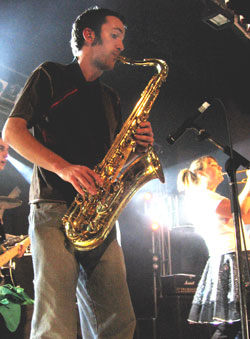 Almost 5000 people from around the country came together to enjoy some of the best Christian music, arts and teaching in Australia.

Weather conditions held up for campers, leaving many to consider the 20th anniversary of the event, the best ever Blackstump.

In his final year as Festival Coordinator, Rod McLean rated Stump ’05 as a wonderful year and an amazing experience.

The festival provided a wide range of activities for ‘Stumpers’ including workshops, Bible studies, worship times, bands, performing arts, a celebration carnival, and even snowboarding.

Melbourne band Sounds Like Chicken played at the festival for their fifth consecutive year.

Saxophone player Joel Dawson said the band kept returning because of the atmosphere of the festival.

“We really just love the arty feel of the festival and the interesting people you see wandering about. Definitely some of the nicest crowds we’ve played for,” he said.

Sounds Like Chicken were just one of the numerous bands to attend the festival this year.

First time ‘Stumpette’ Liz, 21, from Queensland said she would definitely return next year, “The worship gatherings, workshops and bands were great,” she said.

Organisers said they were looking forward to seeing more Queenslanders at Blackstump 2006.