BBC boys rise to the occasion 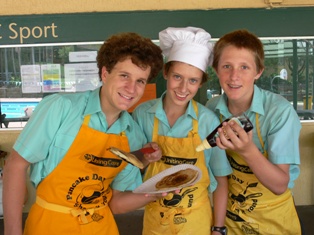 This was the third year that BBC boys had participated in the fundraising program,

BBC’s organiser of the event, Pastor Alan Cheel, said the boys produced a great effort, more than doubling the number of pancakes cooked and funds raised in comparison with last year.

“It was wonderful to see the delight on the boys’ faces as they sold their last pancake and accomplished their target,” Pastor Cheel said.

Photo : BBC boys cooking up a storm on Pancake Day