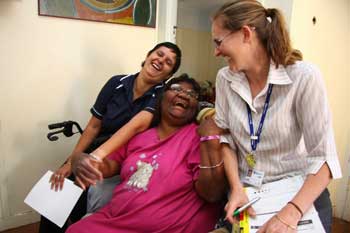 The leading not-for-profit community health and aged care provider was announced the winner of the Community Organisation Category for its contribution to promoting reconciliation in Queensland.

Blue Care Indigenous Coordinator Norelle Watson said it was an honour for Blue Care to accept the award.

“Blue Care is extremely proud of its initiatives to promote reconciliation in Queensland and it’s a wonderful achievement for our efforts to be recognised at such a high level,” Ms Watson said.

Blue Care’s commitment to encouraging reconciliation is demonstrated through ongoing program development and employment of Aboriginal and Torres Strait Islander staff and improving access to health and aged care services for Indigenous people.

“We have established cross-cultural training programs, mentoring, scholarships and career paths for more than 130 trainees and continue to provide strong support to Aboriginal and Torres Strait Islander health providers across Queensland.”

The awards ceremony was held at The Gallery of Modern Art in Brisbane and formed part of the state’s Reconciliation Week celebrations.

In 2009 Blue Care was awarded a prestigious ‘Queensland Great’ Premier’s Award for its significant role in the history and development of Queensland and was officially named a ‘Q150 Icon’, as voted by the public for being one of the state’s most recognisable entities.

Blue Care started as the Blue Nursing Service in 1953 and has grown into one of Australia’s leading providers of community health and residential aged care. Blue Care staff and volunteers support the elderly, people with a disability and others in need in the community to remain independent for as long as possible.