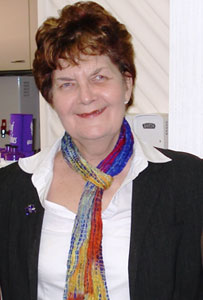 “Becoming the first female World President is quite daunting but at the same time extremely exciting,” said Dr Fairley. “I feel very humbled to have been chosen for this position.

“When I made my speech at the board meeting in Malvern, England, after I was installed I quoted that wonderful verse from Esther 4:14.

“I truly believe that God has chosen me for this position for ‘such a time as this’.

“Roles like this one do not depend on whether the person is male or female.

“It is the gifts the person brings to the job and I have always believed that God equips me for whatever role I have undertaken in ministry.

“I also think that as women we approach leadership from a different perspective and the test of that will be when I have to chair the International board meeting next year.”

Dr Fairley has been involved in CFO since a friend and former World President, Colin Ray, invited her to attend one of the very first CFO camps held on the Sunshine Coast in the 1970s.

“Roland and Marcia Brown came from the States to lead this camp and it changed my understanding of prayer forever,” she said. “The camp program had a wonderful rhythm on ‘inner’ and ‘outer’ activities which involved both the right brain and the left.

“I loved the movement of the program during the day and found myself being totally immersed in it.”

CFO International is now in eight regions of the world: Europe, South Asia, East Asia, North America, East Africa, West Africa, South Pacific and Latin America. The next International Camp will be in August 2012 in Lima, Peru.
“It is exciting to see the growth of camps in Africa and Asia.

“My challenge will be to see how many of these regions I am able to visit during my five-year term as World President,” said Dr Fairley.

“He was totally convinced that prayer could change the world and he was very open to a wide variety of Christians coming to the early camps.

“In Queensland there is only one camp each year on the May long weekend at the House of Happiness on Bribie Island.

“Our campers come from a variety of churches including Uniting, Presbyterian, Anglican, Catholic.”

“Anyone interested in deepening their relationship with God, discovering more about prayer and how to pray, living in a Christian community for a weekend should come along,” she said.

For more informaiton about Camps Farthest Out visit www.cfointernational.org