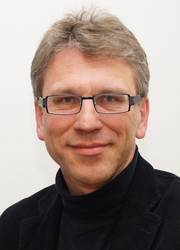 The global ecumenical movement must bring the hope of peace and justice to a suffering and divided world, says the new general secretary of the World Council of Churches, the Rev. Olav Fykse Tveit.

"As we enter into the second decade of the 21st century, the world continues to face many crises … financial crisis, climate crisis, a food crisis, a new wave of terrorism and violence, new burdens of injustice and violations of human rights," said Tveit, preaching on 11 January at WCC headquarters in Geneva.

"We start this year also with a greater concern for the religious freedom of some of our Christian sisters and brothers in several places," noted Tveit of the (Lutheran) Church of Norway as he took up his post at the head of the world’s biggest church grouping.

The WCC gathers 349 churches – principally Anglican, Orthodox and Protestant – and represents some 500 million Christians worldwide. Tveit was elected to the WCC post in August during a meeting of the church grouping’s main governing body, its central committee.

The 11 January service included prayers, hymns and readings in various languages, and was attended by WCC staff as well as representatives of other international church organizations based at the Ecumenical Centre in Geneva.

Tveit took as his text the biblical account of the baptism of Jesus in the River Jordan.

"The movement to which we belong starts with Christ’s baptism," said the Norwegian theologian.

"Let us celebrate and remind one another how much we are given in the name of Jesus, as we enter into the many fights against evil, against injustice, against our own shortcomings and sins," added the 49-year-old Tveit.

"In this beloved ecumenical movement, we also enter into the depths of this world and its suffering and divisions – and together, we shall be the voice calling to newness of life in the name of the beloved Son," he stated.

At the time of his election, Tveit was the general secretary of the Church of Norway Council on Ecumenical and International Relations. He is the second Lutheran to head the WCC in its 62-year history. Tveit succeeds the Rev. Samuel Kobia, a Methodist from Kenya, who stood down at the end of 2009.

The new WCC general secretary recalled how in 2007 his predecessor planted an olive tree at the site of Jesus’ baptism at the River Jordan as part of the launch of the "Amman Call", a WCC initiative to promote justice and peace in the Holy Land.

This tree was intended as, "a sign of our commitment to work for a just peace", said Tveit. "This, then, is the perspective in which I see my calling as I now succeed Sam," he added. "We are one in the name of Jesus, the beloved and the loving Son. Jesus calls us all to follow him in a daily conversion from evil; to each day bring the hope of peace and justice to the whole world; and to do this inspired by the Holy Spirit."