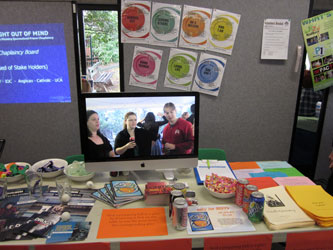 With a common theme of developing community connections, there were around 27 displays and stalls from congregations in the Presbytery as well as the Synod and the Assembly alongside those from ecumenical and para-church organisations and agencies, such as World Vision.

“A common theme running through these speakers was the need to reclaim the place of evangelism; i.e. to encourage
culturally-appropriate ways for Uniting Church folk to share faith.”

Oxley-Darra Uniting Church youth worker, Ken Acworth, spoke of how, in the aftermath of flood devastation in the Oxley- Corinda area, connections are being made with community, local church and Christ.

“Ministry expo 2011 provided a forum whereby those attending could be encouraged by mission and ministry happening in
various congregations, schools, agencies and organisations; as communities are being served,” said Mr MacGregor.

Photo : One of the Ministry Expo stalls. Photo by Josie Nottle