Fierce storm tears through The Gap 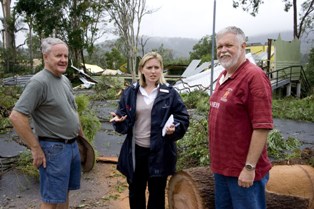 Members of The Gap Uniting Church are still struggling to come to terms with being at the centre of one of the worst storms ever to hit Brisbane.

On 16 November water forced its way through the roof of the new church building causing extensive damage to the church and destroying the kitchen ceiling and floor.

The Church’s original hall, named after Scottish Reformation leader John Knox, was flattened and another hall used as a workshop by the neighbouring Gap High School was reduced to twisted rubble. The newly opened Bike Shed underneath the hall remains intact.

New louvres in the main hall were smashed and fallen trees littered the car park and lifted the driveway in parts.

The manse which was being restored ready for a new minister suffered major roof damage when the patio cover at the back was rolled up and folded over the house by the cyclonic winds.

The Uniting Church’s insurance assessors gave an initial estimate of the damage as in excess of $500 000.

The damage has caused major disruptions to users of the facilities including a Kindergarten Association Crèche, an exercise class for the over 50s and the new bike maintenance classes for troubled students from the High School.

Local Member of Parliament Kate Jones said it was very sad to see what has happened.

“The Gap Uniting Church does so much for our community. It is so sad to see what has happened here but we all know that this is a very strong community and we all know that if there is anyone that can come together at a difficult time I have full faith the congregation here will.

“The Gap Uniting Church is an institution in our community. They spend every other day of the year doing outreach services so I think it might be time to switch it around and get people to come and support the Uniting Church get back on track.”

Ms Jones said the local council had recently assisted the church in many projects.

“We just opened the bike shop which has survived underneath all that mess [the John Knox Hall].

“At the end of the day nobody was hurt here, we can get this fixed up and I’ll do anything I can to ensure that we do that as quickly as possible and help get the church and the buildings up and working again,” she said.

The Gap Uniting Church Finance and Property Committee Chairperson Ian Hayes said he was impressed by the speed of insurance assessors and builders.

The day after the storm the site was full of people offering to help.

“It was interesting to see how the church could work together,” he said.

“We had UC Insurance out here, we organised the assessors on site, by the end of the day we had loss assessors appointed, the builder appointed, roof tilers on, tradespeople in, and it was an example of the church in action.”

Mr Hayes said they had received calls in from a number of churches offering help and were in the process of assessing where residents and church families were in terms of their own needs.

“We are encouraged that there are other church communities who are willing to assist,” he said.

Gap congregation member Ian Orchard said activities on the church grounds have been put on hold. “Everything is postponed at the moment purely for safety reasons and until we can get things cleaned up and dry. We will try desperately to get things back in to working order as quickly as we can,” said Mr Orchard.

“In terms of worship, we will be in action this week, with some restrictions, but we will be here.

“The important thing is that everybody who is working here, while they are all devastated, have all got smiles on their faces.

“We have got so many people in the community ringing and offering us assistance which is just wonderful.”

Mr Orchard said that the local community has become closer as a result of the storm.

“You have only got to listen to the stories of people who have met neighbours they have never known before.

People have wandered down the street from other suburbs to offer help in shifting things.”