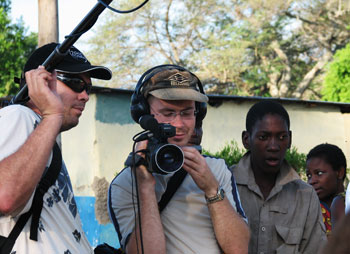 Along for the ride was sound recordist and Centenary Uniting Church youth worker Jason Bray.

The result was the documentary Seven Days, a brief look at a week in the life of Ms Dixon-Thompson whose primary role is to care for the numerous orphans (mostly AIDS orphans) in the community.

“At first everything seemed good. The children were happy and smiling and we didn’t think people were that sad or their lives that broken,” he said.

“One morning we both had to go to school and help kids write down sponsorship details. One of the questions was ‘is your mum or dad dead?’

“I sat down with a child. We went through the questions and when we got to that question, it stopped us in our tracks. It was the first point where we realised that everything was not OK.

“It ended up being the opening scene. That reality hit home.”

Ms Dixon-Thompson lives that reality and Mr Bray said it was hard for her to have long lasting relationships with local people because of the death rates.

“She has friends, but many of those people die of AIDS,” said Mr Bray.

“We were really impressed with Fiona. She has a real stamina and drive that enables her to push past the complete poverty she lives in and simple things like loneliness and missing her family growing up back here in Australia.”

Later this year Mr Bray is taking a group from Centenary Uniting to experience Fiona’s world for themselves and he hopes they recognise the abnormally affluent lives they live in Australia.

“I want them to be well and truly aware of the reality that a large percentage of the world lives in. We do not live the normal lifestyle.

“I want them to wrestle with what that means and what they can do about it.

“The answer lies in empowering people in the developing world to go forward.

“Not so much in charity but in solidarity.

“That is what Fiona is doing. She does a lot of hands on stuff but she works closely with the Zambians.

“She would always take a back seat and allow the Zambians to take the lead.”

For more information on where and when Seven Days will be screaned visit http://www.uim.uca.org.au.