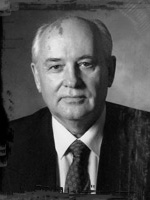 Former Soviet leader Mikhail Gorbachev has told an interfaith gathering his life has never been the same since the day in 1986 when the Chernobyl nuclear power station exploded creating the world’s worst nuclear disaster. "The disaster was a shocking reminder of the reality of nuclear threats and it has become a symbol of modern technological risks," Gorbachev said in his message to a 26 April gathering at the headquarters of the World Council of Churches in Geneva.

In his written message, Gorbachev said he had been awakened by a phone call at 5 a.m. informing him of the accident at the nuclear power station in Ukraine, which was then part of the Soviet Union.

"My life has never been the same since," he told the meeting attended by representatives of Geneva’s Jewish, Islamic and Christian communities.

Gorbachev was Soviet communist party leader from 1985 until the dissolution of the Soviet Union at the end of 1991. He is now chairman of Green Cross International, a Geneva-based ecology group he founded in 1993 which organised the interfaith gathering with the WCC.

"For the first time since Hiroshima and Nagasaki, Chernobyl revealed the cataclysmic potential of nuclear disasters, whether deliberate or accidental, and raised questions that remain pertinent and largely unresolved," the former Soviet leader said.

Gorbachev said "government transparency" was of "utmost importance", and he urged a stepping up of renewable energy programmes.

The world had learned the truth about the Chernobyl disaster because of the policies of "glasnost" (openness) and "perestroika" (restructuring) he introduced as Soviet leader, he asserted.

"Had this not been the case, the facts and implications would have been hidden, disguised or devalued," Gorbachev said.

"The thirst for energy of the highly industrialised and fast industrialising societies drives leaders to undertake projects that could threaten both peace and the future of life," he said.

Kobia urged leaders of different faiths to commit themselves to "inter-religious dialogue and co-operation for justice, peace and the future of life on our planet earth".