Home > Queensland Synod News > Getting away with murder

Getting away with murder 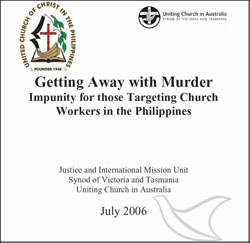 PASTOR ANDY Pawican, aged 30, was murdered by soldiers of the Armed Forces of the Philippines in Fatima village, in the mountainous town of Pantabangan, around 180 km from metropolitan Manila.

Andy Pawican dedicated his life to spreading the word of God. He was a licentiate pastor of the United Church of Christ in the Philippines (UCCP), a partner church of the Uniting Church in Australia.

On 21 May 2006 while walking home from church with his family, Pastor Pawican was confronted by four armed men.

They claimed to be members of the armed opposition group the New People’s Army (NPA). They said they were looking for William Tuping, a friend of Pastor Pawican’s who lives near the UCCP chapel in Sitio Maluyon.

At around 3pm, the villagers heard gunshots. The four men that had confronted Pastor Pawican were in fact soldiers of the 48th Infantry Battalion of the Armed Forces of the Philippines.

The soldiers brought the baby back to Pastor Pawican’s wife.

At around 5pm, a villager found the body of Pastor Pawican on the roadside. He had been shot in the right cheek.

The soldiers initially claimed that Pastor Pawican was a member of the NPA who was killed in an exchange of fire. They paraded the body around the village. They admitted to killing Pastor Pawican. They warned the villagers that the same fate would befall them if they did not cooperate with the soldiers.

On 22 May, the soldiers ordered ten villagers to carry Pastor Pawican’s body to the road. Only eight returned.

This is just part of one story included in a new report produced by the Justice and International Mission Unit of the Synod of Victoria and Tasmania entitled Getting Away with Murder: Impunity for those Targeting Church Workers in the Philippines.

The report documents recent murders of members of the UCCP in the Philippines and the lack of progress in bringing any of those responsible for the murders to justice.

Speaking to the members of the Uniting Church Assembly meeting in July, Bishop Elmer Bolocon of the UCCP said the killings must stop.

The Uniting Church Synod of Victoria and Tasmania are committed in partnership with the Southern Luzon Jurisdictional Area, United Church of Christ in the Philippines (UCCP SLJA) in calling for change in the Philippines.