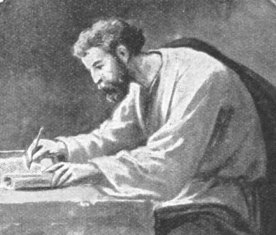 One of the foremost Western calligraphers is producing a complete handwritten, illuminated Bible for the first time since the invention of the printing press in Europe in the 15th century from his studio in Wales.

Donald Jackson, scribe to Her Majesty Queen Elizabeth’s Crown Office at the House of Lords, is five years through the seven-year US$3.4 million project commissioned by the Benedictine Saint John’s Abbey and the Saint John’s University in the US state of Minnesota.

From his scriptorium in Wales, Jackson oversees scribes, artists, and craftsmen who work with him on the handwriting and illumination of the seven-volume, 1150-page Bible.

"I usually start by taking a large brush and putting it in ink and begin," he explained. "From these marks will grow a feeling for the mood of the piece and the elemental theme. From this I weave in the detail."

He receives instructions on the passages chosen for illustration by goose quill on vellum, from a committee of scholars, historians, and artists. Inks derived from hand-ground silver, copper gold and other precious minerals are employed.

For the first time since the start of the project, pages from the St John’s Bible went on display outside the United States, at London’s Victoria and Albert Museum. The exhibition runs until 1 May and features selections from "Prophets", the fourth volume of the Bible.

The completed work, bound in Welsh oak, will be housed in Collegeville, Minnesota at the Museum and Manuscript Library of Saint John’s University. When open, it will measure two feet in height (60 centimetres) and three feet (90 centimetres) in width.

The hand-drawn illuminations depict scripture from an ancient and modern perspective, including concepts of science, space and technology.

"Illuminated manuscripts have always marked the time and place in which they were created, and The Saint John’s Bible will reflect our world at the beginning of the twenty-first century for future generations," said Brother Dietrich Reinhart, president of Saint John’s University.