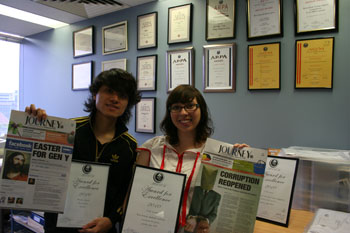 In its best ever performance, Journey took home two gold awards and a bronze award from the 2010 Australasian Religious Press Association (ARPA) awards in Tasmania in September.

Journey was presented the gold award for best feature (multiple authors) for the July 2009 edition which looked at the 20th anniversary of the Fitzgerald inquiry and the Church’s role as a social arbiter.

The best feature award is one of the most hotly contested categories of the ARPA awards which include professional Christian media from all over Australia and New Zealand.

Judges said the edition contained “a salutary message for those in the church who say the church should have little to do with civil affairs.

“Here is a powerful illustration of the church as salt and light.

“From individuals working within the system, to activists demonstrating on the streets, to church leaders leading prophetically; this feature leaves you wanting more in the best sense,” said the judges.

“Significantly, the lessons are not left twenty years in the past but consistently brought to bear on today’s reality.

“In what could be dry ethical territory, the power of the personal voice is compelling.”

Journey also received a gold award for the item or feature that shows the most originality for the Easter 2009 front page story Easter for Gen Y written by John Harrison.

The story looked at how the Easter story would be spread now and used Facebook as an example of how people communicate news quickly in today’s world.

The bronze award was for Journey’s outstanding layout, mostly the work of designer Osker Lau. Judges appreciated the “powerful covers that project the main story with immediacy”. They also enjoyed Journey’s use of illustration, photography and commented on the masthead.

Other Uniting Church publications were also rewarded for their excellence in the professional field of religious media.

Crosslight, the magazine of the Synod of Victoria and Tasmania, received a bronze award for Best feature (single author) and bronze for best original photograph.

Revive, the quarterly magazine for the Synod of Western Australia, won a bronze award for best ecumenical story.

The Assembly’s The Transit Lounge won a bronze award for best electronic publication.

Photo : Part of the Journey team with current and previous ARPA awards