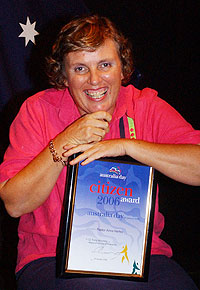 Uniting Church Lay Pastor and Minister of the Mt Louisa House of Praise, Anne Harley, received the Townsville Australia Day Citizen of the Year for her efforts in co-ordinating Stable on the Strand program.

Townsville Mayor Tony Mooney was reported by the Townsville Bulletin as having said that Townsville was acknowledging citizens who have achieved at the highest level.

Ms Harley claimed that she was just the face of the Stable program which only happens because so many volunteers and a good working committee make it so successful.
”There are a lot of people who work to help give our great city a spirit,” Pastor Harley told the Townsville Bulletin.

Member of the Mt. Louisa congregation Julie Hendle commended Ms Harley’s enthusiasm, commitment and attitude and said she was always there at the assembling, pulling down or final pack up and every day in between.

"It does put her a little above being just the face," Ms Hendle said.

"To have those attributes acknowledged and honoured in such a way is a wonderful achievement for herself, the Stable and the Christian community and I am sure you all thank God for the opportunity to know her, to have worked along side her and believe she is truly worthy of the honour she has received."

Two other Uniting Church members were honoured on the day.

Edna Wright, a member of the Atherton Congregation, named Eacham Shires Citizen of the Year for her work in the community, especially in the area of music.

Congratulations also to Esther McIntosh, Burdekin Uniting Church member, awarded Citizen of the Year in the Burdekin Shire for her work in the community which includes work with Legacy, Senior Citizens Association, Uniting Church and other community work.